The need for solid footing

The need for solid footing 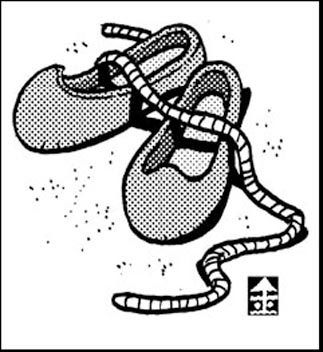 It might have been a pair of straw shoes, or perhaps a pair of moccasins, that a man in the state of Chung, during the Warring periods, went out to buy at a market. Before he trod his way out, he used a string to measure the size of his feet, in order to buy shoes that would fit.
The man found a shoe seller in a market crowded with people.
But suddenly it dawned on him that he that left at home the string which he measured his foot with. He recalled that he hung the string on a chair when he left home. Hence the man from Chung hurried back home. Soon he entered his abode, fetched the string, and headed to the market again. He hurried as fast as he could, but when he arrived many people had already departed the market, including the shoe seller.
As he was standing still in the market street about to cry, those who were returning home gathered around him one after another. They asked him why not he had tried the shoes on himself instead of measuring with a string.
This story was passed on by word of mouth from time to time.
It should be one? foot ?the size and width of feet ?that are most important when buying shoes. Indeed, if you try to buy shoes at a store, everything you need is already there. But in this story, Chung appears to have been stubbornly obsessed with one thing ?he had to measure his feet to buy shoes.
As a consequence, he forgot the original reason he did it and fell for the secondary measure, not the fundamental one.
In other words, this man failed to remember the real relationship between shoes and feet, because he was too engrossed in his principles, ideas, or dreams. And in the end he was unable to buy shoes because of that.
Other maxims share a similar origin, such as one that refers to those who are lost in old customs and thoughts.
Moving ahead to modern times, the entire nation of Korea is in a fuss because of the so-called “three-nos”policy.
A strong publicity campaign is under way by the president, deputy prime minister of education, and the rest of the administration.
Those who work in the field of education have a lot of complaints about this publicity.
The government seems to have a certain orientation that it is determined to follow no matter what. That orientation should not be a misled desire to achieve its doctrinaire dream of equality.
You need two solid feet to buy shoes, not the string you measured your shoe size with.