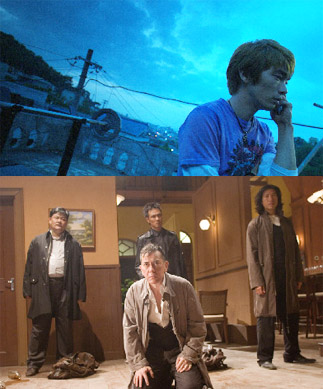 The Jeonju International Film Festival opens with the film “Off Road,” Top, and closes with “Exiled,” Bottom. Provided by the organizers

“Dye One’s Eyes” is the eccentric slogan adopted by the Jeonju International Film Festival this year in an attempt to influence an alternative vision of the world through film.
It’s an ambitious effort by the festival, which began eight years ago with a focus on digital and experimental films that steer away from the mainstream. Today they maintain the same non-comformist spirit.
This year the festival opens with “Off Road,” the story of a laid-off bank clerk who decides to rob a bank so he can afford to run away with his girlfriend. The film, shot in Jeonju, deals with the agonies of youth, while featuring an alluring city landscape with a traditional air.
Indie Vision, a lineup of international films that are in official competition, introduces young and emerging directors whose works offer unique aesthetics, both in style and content.
It includes “Chrigu,” a black and white documentary by Jam Gassmann that delves into the psyche of a man who found out when he was 21 that he would shortly die because of a tumor on the back of his neck. Chrigu, the main character, decides to film the process of his death with his best friend, who is the film’s director.
“Look of Love” by Yoshiharu Ueoka is a gloomy 8 millimeter film about two prostitutes, a pimp and his brothers, who were abandoned by their mother.
Digital films have always been an ambitious part of the festival. The organizers step away from Asian directors this year, choosing three European directors to compose an omnibus film, all shot using digital cameras. It includes Portuguese filmmaker Pedro Costa, German filmmaker Harun Farocki and French filmmaker Eugene Green.
The Peter Watkins’ retrospective section focuses on Watkins, who has been called the king of fake documentaries.
Another section offers special screenings of films from Turkey, which have shown unique cinematic traditions and aesthetics over the years. (The festival has previously dedicated this section to Cuban films, Maghreb films and banned films from the former Soviet Union.)
Another popular section is the midnight screening, which shows films from evening to daybreak.
The festival closes with “Exiled” by Hong Kong director Johnnie To. It is set in Macao in 1999, when the city was faced with a drastic turning point right before being returned to China. The film, which is dubbed “the summation of To’s past films,” fuses his dark sense of realism from films like “Election” with the stylish romanticism of “The Mission.”