Director trots the globe in search of the perfect western

Director trots the globe in search of the perfect western 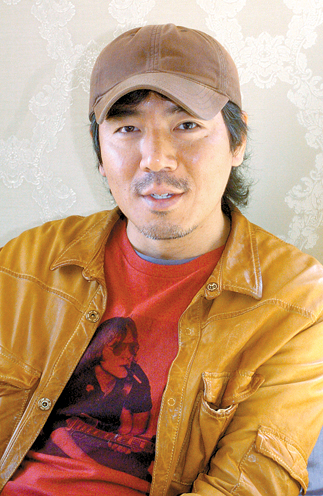 “I wanted to take the most American of film genres ― the western ― and turn it into something that felt authentically Korean,” said director Kim Ji-won. After thinking about it, Kim said he figured Manchuria during the Japanese occupation is the perfect setting.
“Then, I realized that there are already films by Korean directors that are westerns set in Manchuria, such as Lee Man-hui’s ‘Cut the Chain’ [1971] and Shin Sang-ok’s ‘Vagabond.’ I didn’t get to see it but I heard that Im Gwon-tek also made this kind of film,” he said.
I met Kim when he was in the middle of making his new film “Good Guy, Bad Guy, Strange Guy,” which is set to open in theaters early next year. The idea of Kim (who is known for mixing genres, including horror, comedy and noir) shooting a western in Manchuria has been a hot topic in the industry for some time.
The title, which the director borrowed in part from Segio Leone’s 1966 spaghetti western “The Good, the Bad and the Ugly,” makes the film accessible for non-Koreans as well. The star-studded cast includes Song Gang-ho, Lee Byeong-hun and Jung Woo-sung, forming a ‘dream team’ of actors.
“Good Guy, Bad Guy, Strange Guy” is set during the 1930s when the Japanese occupied Manchuria. Conflict elements such as the West eying the land for occupancy will add to the tension of the plot. Visuals will also be strong “with Westerners and Asians riding horses. Besides horses, there will also be motorcycles and jeeps appearing in the film,” said Kim.
The three stars will play horse-riding thieves who embark on various adventures after discovering a treasure map. As to matching the three to their respective roles as the good, the bad and the strange, the director said: “The roles can change as the plot develops. On the outside, they can all be bad guys. They are basically three guys who, during the Japanese occupation, had to leave their homeland to go to Manchuria and struggle to adjust to living there.”
The production cost totals 14 billion won ($15 million). Many action scenes were digitally made before the actual shoot.
“The last big chase scene features almost all of the characters in the film coming together to perform. There needed to be a lot of preparation beforehand. Also, because we had Chinese and American staff working together with translators, we had to be prepared,” Kim said.
The film will be shot mainly in China, for around six months, with other shoots taking place in Hollywood and Korea.
“I thought about a lot of things as I was going from continent to continent. I wondered what the Korean map would feel like if the top [of the peninsula] stretched wide open,” he said.
While preparing for the shoots, Kim said that he felt a sense of respect for those who direct blockbusters. “Even though the process was really tough, my heart beats when thinking about the three actors and the vast land that we will be filming on,” he said.