Yang to the east, yin to the west

Yang to the east, yin to the west 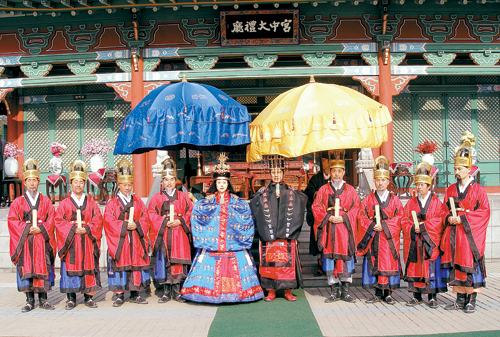 Song Soo-ryun (bride) and Rhee Yu-yal rehearse their wedding, which will be held in the royal style. Provided by Song Soo-ryun

17th in the series Traditional wedding

Kim Hui-jin felt the urge to look up, but she didn’t dare. Her deaconess had told her a refined bride should stand still, stare at the ground and wait to be told when to move. And, the deaconess whispered, a bride should remember to be as gentle as a lamb.
Kim, still in college, was getting married in front of some 500 guests. But she could only see two people, out of the corner of her eye. These were the traditional deaconesses, both dressed in hanbok, who stood by her side to help her take her deep bows.
“Who would’ve thought I would get married in the traditional way?” said Kim, who observed that she is a member of her school’s hip-hop dance club.
But her husband, a Korean-Australian, wanted to have a traditional wedding and she agreed on the condition that they have a Western-style wedding when they move to Australia.
The essence of a traditional Korean wedding lies in solemn formality. A stern moderator stands between the bride and the groom and reads aloud the marriage vows as the young couple each take turns bowing and taking sips from a wine glass. The bride and groom stand facing each other, with a table between them filled with food and props that symbolize good fortune.
A pair of wild geese (nowadays wooden replicas are used) are placed on the table to represent harmony, happiness and chastity. The blue and red silk cloth that covers the geese represents the principles of yin and yang. The man stands to the east and the woman to the west, and when they bow they are thought to be bringing the dual forces of the cosmos together.
The groom stands tall and proud, wearing a formal durumagi (silk overcoat) over a loosely fitting hanbok. He also wears samogwandae (a type of black hat and leather belt), accessories that, in the past, were reserved for high palace officials, but which commoners are permitted to wear on their wedding day.
The bride looks down modestly at her feet and wears a high-waisted hanbok dress made from silk or hemp.
She hides her hands under a long sash decorated with embroidery that depicts flowers and cranes. Her hair is braided under a headpiece. They bring the wine glasses to their lips four times and thank the heavens, the earth, their ancestors and then each other. 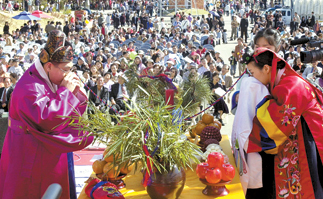 A couple drink wine during their wedding ceremony. The items on the table between them represent prosperity, health and fertility. The groom, representing yang, stands to the east. The bride, representing yin, is to the west. During the ceremony they bow to each other and thus, according to tradition, unite the dual forces of the cosmos. [JoongAng

“Although the complex ceremony has been condensed to a much simpler form these days, it can still be tough for couples who are not used to following the vows and declarations using Chinese script,” said Wi Chang-bok, a member of the Confucisu Sunggyungwan society, who explained that an authentic traditional wedding took several days to complete, if it was done properly.
In the past, weddings were held at the bride’s house, in the garden. The groom traveled by horse to the bride’s home, and, after the wedding ceremony and three days of rest, he takes his wife in a palanquin to his parents’ house to live.
Marriage gifts were sent to the bride’s home via couriers, before the wedding. The groom presents the wild goose to the bride’s mother. In the past, the wedding ceremony was the first opportunity for the bride and groom to sneak a glance at each other, because traditional weddings were arranged by matchmakers.
After the wedding the bride and groom sit together for a pyebaek, to pay respect to the groom’s parents. The mother-in-law throws jujubes onto the bride’s skirt at this time, as a symbol of her wish that her new daughter-in-law will have many children.
“A wedding ceremony used to start just before sunset, because that is when the yin force of women starts to grow,” said Choi Yeong-gwang, secretary-general at Minsiryun, a civic group that studies and promotes traditional values. “The ceremony used to end around midnight, because that is when yin reaches its peak.”
According to Minsiryun, which organizes traditional wedding ceremonies, such weddings were most popular among elder Korean couples who couldn’t afford to hold weddings when they were younger. But the idea of having a traditional wedding has now spread to younger couples as well and three out of four couples seen by Minsiryun are in their 20s.
The cost of a Minsiryun wedding ceremony is half the cost a modern wedding held in a lavish Western-style hotel. They offer a reception meal that comes with performances of traditional fan dances and a samulnori percussion band.
For those who want their traditional wedding to be extra special, some agencies have begun to offer royal court weddings that mimic royal weddings of the past.
Song Soo-ryun, a lecturer at a university, chose the royal court wedding for her ceremony. She will be dressed in attire worn by the queen during the Korean Empire period, from 1897 to 1910.
“I didn’t want my wedding to be the same as others,” Song said. “I saw a royal wedding in a television drama and I thought it was very beautiful.”
At a recent dress rehearsal, she wore a hanbok with six layers, a heavy wig and a crown and practiced how she should walk, with an emphasis on dignity and elegance. Some 20 “king’s men” followed her in a procession as she walked toward her “king.”
“My neck hurt a little but it was an exciting experience,” she said, giggling. “I felt like a real queen.”

There are various wedding halls that hold traditional wedding ceremonies throughout Seoul.

1. Royal Court & Wedding Ceremony Hall in Yongsan
This place provides both royal and traditional weddings. The rituals are recreated according to advice from Minsiryun. Clothing rentals and make-up are free. Price ranges from 1.5 million won to 2.5 million won, depending how many staff actors are hired to perform the rituals.
(02) 825-6300

2. The Shilla Seoul
The Shilla provides a traditional wedding ceremony befitting its prestigious and luxurious name. The event has both traditional and modern elements, with a modern-style banquet following a traditional ceremony. Price varies according to personal wedding plans.
(02) 2230-3431

3. Lotte World
For those who desire an indoor wedding that closely resembles the past, the Performance Hall at the Folk Museum at Lotte World is the place to go.
Brides and grooms will find traditional culture in every detail of the ceremony. Packages range up to 3 million won and include traditional performances, offerings to ancestors and photo shoots.
(02) 411-4765

5. Dream Land
This amusement park operates a separate wedding hall near the park. The ceremony takes up to 40 minutes and is based on wedding scenes of the past. The price is 1.4 million won.
(02) 945-3000

6. The Korea House
The traditional ceremony here is unique because the groom pays a visit to the bride’s “house,” which has been set up beforehand near the wedding lot.
During the evening, there is a performance of pansori, the traditional Korean opera. The price is 2,845,000 won.
(02) 6278-1002

7. Wedding Seoul
This company offers wedding ceremonies based on rituals from specific regions. They take place at a wedding hall in Nakseongdae. Among a long list, Wedding Seoul offers rituals based on practices from Seoul and the Gyeonggi province area. A standard ceremony costs 550,000 won.
(02) 874-6066
By Lee Eun-joo