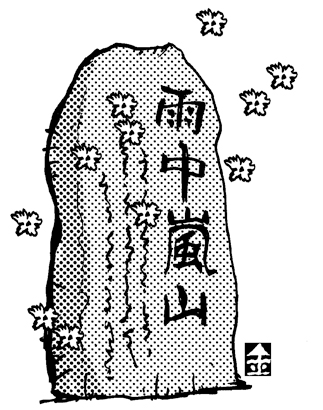 Zhou Enlai, who is admired by the Chinese even 30 years after his death, spent part of his youth in Japan. He wanted to follow in the footsteps of Sun Wen and Lu Xun, who also spent time in Japan dreaming of reforming China. However, just a year later, Zhou ended his dream of studying abroad. He audited classes at Waseda University and the University of Tokyo, but it was hard for him to become a regular student. And the status of his country with the May Fourth Movement urged him to return.
On April 5, 1919, Zhou Enlai wrote a poem at the top of Arashiyama, a picturesque place in Japan. Looking at the falling cherry blossoms in the spring rain, the 21-year-old Zhou wrote the following. “Thick fog and light rain/ light shining within the cloud is more beautiful than ever/ although the truth is hard to know the more we try to know/ one ray of light that I saw coincidently, is more than beautiful.”
Zhou later became a revolutionary leader after studying in France, and became the first prime minister of China. In 1972 he signed documents with Japanese Prime Minister Kakuei Tanaka to normalize relations between the countries. Because of this, he is more popular than any other Chinese politician in Japan. In the place he wrote the poem, “Arashiyama in the rain,” stands a monument the Japanese made for him.
Chinese Prime Minister Wen Jiabao visited Japan last week and presented flowers to the monument. It had been six-and-a-half years since a Chinese prime minister visited Japan. Although Prime Minister Wen’s schedule was very tight, he hoped to visit the monument. We can see his strong resolution to bring the relationship of the two countries back to normal, just like Zhou did. Prime Minister Wen commented, “Prime Minister Zhou was the leader of the Sino-Japan relationship. The friendly relationship that started in his days will shine more brightly than ever.”
The two prime ministers both graduated from the same middle school, Nankai Middle School in Tianjin.
Zhou Enlai is remembered as a person who fixed and mended his own clothes his entire life. He visited every inch of China and shared the lives of the people, and now Wen Jiabao has inherited this image.
Zhou Enlai, who died in 1976, said, “I would like to visit Japan once more in spring when the cherry blossoms bloom.” After his days of studying in Japan, his dream never came true for the following 60 years.
Perhaps Prime Minister Wen Jiabao, who dreams of becoming the “second Zhou Enlai,” made Zhou’s dream come true.