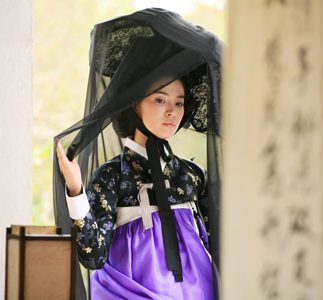 Song Hye-kyo doesn’t want to hear any more about Jun Ji-hyun.
Make that Song’s recent “off-the-record” comment about an old candidate list for the upcoming film “Hwang Jin Yi.” Producers for the film had named several top Korean beauties for the role of the legendary gisaeng (courtesan) and Song and the long-legged sex icon Jun were included on the list.
“I think Song heard about [herself] being compared to Jun a lot even after she got the role and while she was working on Hwang Jin Yi,” said Lee Chun-yeon, the head of Cine 2000, the producer of the film, speaking earlier this month. “That really pushed her [to work harder].”
Song was never on his mind when he and fellow producers started out the search for the most famous (and coquettish) Joseon Dynasty woman who entertained noblemen with her talents to easily master classic literature, dance, music and conversation. At the time, Jun was the girl on producers’ mind, as well as Su Ae, who was in contrast known for her traditional elegance.
“I heard that Song was interested in the role at first, but honestly, I was not very thrilled to hear that,” Lee said. “She was a top star but she still had that cute image from credit card commercials and that’s not Hwang Jin Yi.”
He added that he was only thinking of ways to put her down.
Song used to be an actress with a lot of buzz, until her 2005 film “My Girl and I” (directed by Jeon Yoon-su) failed in the market, hurting her reputation as one of the top television stars.
Song has been on a vigorous diet since then. She lost her trademark chubby cheeks. Her agency occasionally released profile photos of the “new, sexy Song Hye-kyo” over the Internet, proving the rumors that she is working hard to make a grand comeback.
The producers for “Hwang Jin Yi,” had apparently liked the “new Song” a lot. They selected her over Jun or Su.
“We were more or less all surprised by her will and desire to be in Hwang Jin Yi,” Lee said adding that he is now quite satisfied with their decision they made seven months ago over the two other actresses.
The life of Hwang Jin Yi has been adapted to many television dramas, theatrical plays and novels. The popularity for the historical character reached its peak last year when actress Ha Ji-won played Hwang in an SBS TV drama.
Much of filming for the upcoming cinematic version has been shot in the Mount Kumkang area with the help of Hyundai Asan, the South Korean company that runs the tour to the mountain in North Korea. Hwang is said to be born in the region, which is now part of North Korea. The film is mainly based on the novel written by North Korean author Hong Seok-jung.
As for rumors that buzzed in the film industry last week that this film may have the chance to open in North Korea when it opens in the South in June, the producers said nothing has been confirmed.
“Of course we want our film to be opened there,” said Kang Eun-gyeong, a team head from Laughing Boa, the promoter of the film. “But some media went overboard and wrote that North Korea has allowed our film to open there when nothing has been confirmed.”