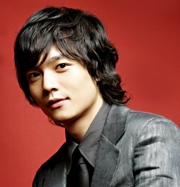 Tickets to the Korea Day event in Japan were sold out in less than an hour last week after a group of ardent hallyu (Korean wave) fans found out that actor Seo Do-young will be holding his first meeting with fans on that day.
Seo is known for his role in the recent television drama “Spring Waltz.”
Shortly after 9 a.m. on April 6, news that Seo will hold a series of meetings with fans was released. Within one hour, a total of 9,000 tickets for three events were sold out. Seo will meet fans in Tokyo (April 18), Osaka (April 20) and Fukuoka (April 23).
“Spring Waltz” is one of four seasonal television series produced by Yoon Seok-ho.
His winter drama, “Winter Sonata,” was the first to be introduced in Japan, bringing fame to Bae Yong-joon, or “Yonsama” as he’s known in Japan. “Spring Waltz” is Yoon’s second release in Japan.
Top hallyu stars have been participating in Japan’s annual Korea Day event since it began.
This year was no exception, and the organizers of the event had to deal with floods of phone calls asking about ticket reservations, said a Korean Tourism Organization official.