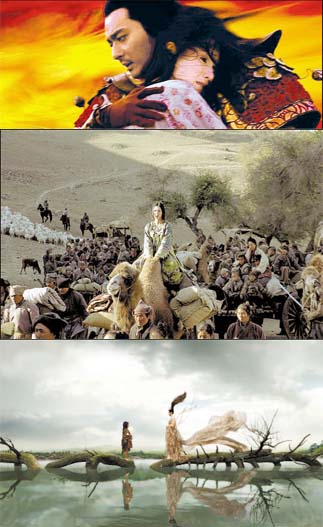 Scenes from “The Promise,” above and bottom, and “Seven Swords” middle. [JoongAng Ilbo]

The Korean film industry is making rapid inroads into China. In the short term, it is a way to boost growth in the local film market. In the long term, it is part of a joint effort to branch out into the world market.
China’s film market has been growing at 30 to 40 percent a year by revenue, and thus Korean filmmakers are anxious to find Chinese partners. In the last year there has been a big jump in the number of jointly produced films. Korean companies have also been opening multiplex theaters with Chinese partners.
The lives of Liu Bei, Guan Yu and Zhang Fei, warlords of ancient China, and heroic tales of many other gallant warriors are chronicled in the “Romance of the Three Kingdoms,” a classic Chinese literary masterpiece which is much loved in Korea and Japan, as well as China.
It’s not surprising that film producers in the three countries should be eager to turn the books into motion pictures, and collaborative projects involving companies from Korea, Japan and China are underway.
A much anticipated project is “Battle of Red Cliffs,” an account of the bloodshed between Cao Cao’s million men as they battled Zhuge Liang and the Zhou Yu alliance. Then there’s the “Romance of the Three Kingdoms: Resurrection of the Dragon,” the story of Zhao Yun, Liu Bei’s military commander. Showbox and Taewon Entertainment are the Korean partners involved in these productions. The production cost of “Battle of the Red Cliffs” is expected to $70 million, the most expensive movie ever made in Asia.
The rapid growth of the Chinese film industry is unprecedented. Last year’s ticket sales amounted to $336 million, a 35 percent increase compared to box office revenues of $248 million in 2005. The Korean market had revenues of almost $1 billion last year but it’s growth was only 3.4 per cent; the current growth rate in China is the fastest in history. The British market research firm Nielsen NRG predicted that by the year 2010, the Chinese film market would reach $720 million in annual ticket sales.
The problem for foreign film makers is that harsh restrictions make it difficult for them to enter the Chinese market. China’s State Administration of Radio, Film, and Television, which oversees China’s film industry, imposes a strict quota system. It will only permit fifty foreign movies to be screened per year. The quota is usually consumed by Hollywood movies, leaving about three slots for Korean movies per year. However, collaborative productions with Chinese film makers are regarded as home produced movies, and therefore Chungmuro (Korea’s equivalent of Hollywood) sees cooperative efforts with China as a bridge to entering the Chinese film market.
Last month’s Hong Kong Film Mart explored the possibilities of joint Korea-China-Japan productions. The Hong Kong Trade Development Council held a seminar titled “Hong Kong: The Gateway to the Chinese Market” to promote collaboration in film production between Hong Kong and foreign movie producers. The CEO of Hong Kong’s Intercontinental Group, Teri Lai, commented on the necessity of joint producing efforts, saying “The walls in the Chinese film market are very high, but once we get past them, great profits await.”
At the Hong Kong-Asia Film Financing Forum, 25 co-produced film projects from Asia were presented.
Director Zhang Ke Jia, who received the Golden Lion Award at the Venice Film Festival for “Still Life,” offered “Shuang Xiong Hui,” a joint production with Japan. Director Pang Ho-cheung’s “Now Showing,” and Zhang Yuan’s “One Night in Beijing” also caught the attention of many foreign investors.
Film producers in Korea and Japan prefer classic Chinese stories to be the theme of their co-produced movies, because the three countries share a similar cultural context. “A Battle of Wits,” “Seven Swords” and “The Promise,” all of which have been released in China, Korea and Japan, are good examples. These movies were filmed in Chinese to target the Chinese market. Box office sales in Korea and Japan were relatively low, but they were a great success in China.
Upcoming releases also feature Chinese classic literature. “Battle of Red Cliffs” is directed by John Woo and the roles of Zhou Yu, Zhuge Liang and Gan Ning will be played by Chow Yun Fat, Takeshi Kaneshiro and Shido Nakamura respectively. It was expected that Jung Woo-sung would be Zhao Yun or Zhao Zilong, but he chose director Kim Ji-woon’s “The Good, the Bad and the Strange,” as his next movie. Parts one and two of “Battle of Red Cliffs” will both be ready for release in time for next year’s Beijing Olympics.
For the “Romance of the Three Kingdoms: Resurrection of the Dragon,” Andy Lau, Maggie Q and Sammo Hung Kam-Bo will be cast in the leading roles, and Jeong Taewon of Taewon Entertainment will be the head producer.
The movie began shooting on April 1, with a production budget of $20 million and will be released early next year.