One woman’s recipe for adjusting to Korean life

One woman’s recipe for adjusting to Korean life 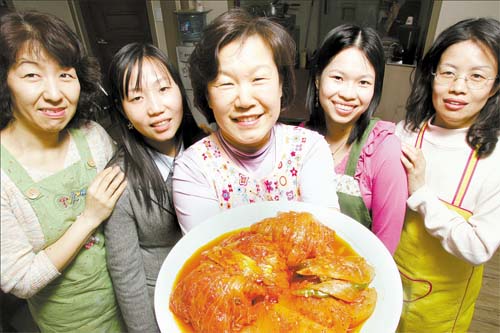 On a recent Tuesday evening, a small number of women climbed the stairs in a shabby building near Sinjang market in Hanam city, Gyeonggi province. Those ascending were from several different countries including Vietnam, Japan, China, Mongolia, the Phillippines and Egypt. On the third floor, Park Jeong-ja, 46, greeted the visitors with a bright smile. Park teaches the women how to cook Korean food during a weekly session offered free-of-charge at Hanam’s Migrant Vision Center.
“Today’s recipe is for boiled seasoned mackerel wrapped in aged kimchi,” said Park, ushering them into the kitchen. Park had already prepared radishes, green onion and fish, all of which she had purchased herself in the market. She proceeded to show the women how to slice the fish and vegetables, with emphasis on thickness and shape. To make sure that they understood, she gestured with her hands.
Park also gave them a sheet of paper containing the recipe. “They all study Korean and can read Korean letters,” she said.
These women are foreign-born wives married to Korean men. They have been learning Korean cooking since last year. Some of them also take Korean language lessons at the center.
The kitchen was small and there was only one stove. The women were unable to practice what they had learned at the center, but Park said they would do so at home. “They go home and try to make it the next day. And they get compliments from their husbands,” she said.
Park said she mostly teaches home style cooking, so that the women can cook traditional Korean dishes for their families, especially their husbands. Normally, the class has 10 people. Park said the class has been enormously popular.
“The women like it very much. Even if I wanted to take a day off, I can’t,” she said.
Park, a professional cooking teacher, began offering Korean cooking lessons to migrant women 18 months ago.
“There was a Filipino couple who lived next door to me, and they worked in a factory,” Park said. “They had difficulty getting ingredients for meals based on Filipino recipes. They also had a hard time eating Korean food.”
One day she made kimchi, bulgogi (marinated beef) and bindaetteok (Korean style pancakes) and gave the dishes to the couple. In the beginning, not being familiar with Korean food, they were reluctant to eat much, but later they came to enjoy everything that Park prepared. 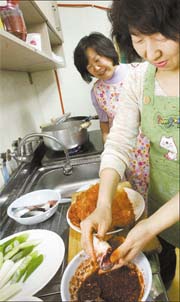 Yuko Takamura dipping a piece of mackerel into a sauce before cooking it. By Kang Uk-hyun

“Migrant families have problems with the food and the language,” Park said. “We try to help with both.”
After her encounter with the Filipino couple, Park, who also lives in Hanam city, came across the Migrant Vision Center, and volunteered to teach.
“I felt sorry for them,” she said. “Some of them married at such a young age, young enough to be my daughter. They come from different cultures and use different languages.”
Several of the women in Park’s class got married when they were teenagers and have husbands who are much older, sometimes in their 40s.
Some of the international couples are separated by two decades. According to Park, they live under difficult conditions.
The cooking lesson starts at 7:30 p.m., because many of the migrant women work during the day time. They either come directly from work or prepare food for their family before they come to class.
Nguyen Thi Trang, 26, a Vietnamese woman, began taking the lessons 10 months ago. “I wanted to learn Korean cooking so that I can cook for my husband,” she said. She is married with two children. She came to Korea four years ago.
In the beginning, she cooked Vietnamese dishes, although she learned some Korean cooking from her mother-in-law. She is good at making dakgalbi (chicken stew) and dubujjin (boiled, seasoned bean curd). Her favorite Korean dishes are pork rib barbecue and pan-broiled kimchi with bacon, she said.
“When I cooked rice cake soup, my mother-in-law told me I had become a ‘Korean’ daughter-in-law,” she said.
Her husband likes her food so much that sometimes he comes with her, to the class, so that he can take care of their babies while she is taking lessons.
Park seems particularly fond of Nguyen, and, as she taught, she tried to make eye contact with her, to see whether the Vietnamese woman understood.
After laying sliced radishes in the bottom of a pot, Park placed sliced onions on top of the radishes. She poured meat stock into the pot and set it to boil. Then she wrapped sliced mackerel with long layers of aged kimchi and placed the resulting packages on the vegetables. Afterward, Park asked Yuko Takamura, a 42-year-old Japanese woman, to repeat what she had done.
Takamura began taking the lessons last September. She has been married for eight years and has two daughters. Takamura said she read cookbooks and learned Korean cooking from her in-laws, and people she met through her church, but this is the first time she has taken a cooking lesson from a professional.
“It is a lot more fun,” she said. “Park is a professional and every point, every remark she makes is very helpful,” she said. “Cookbooks often have too much detail and are difficult. But Park’s explanations are simple and straightforward.”
Takamura said Park’s foods are not too spicy and work well with the Japanese palate.
The difficulty with making Korean dishes, she said, is to deciding how much seasoning to use. “I lived in Japan for over 30 years and I didn’t know what Korean foods should taste like. When I try making Korean food, they ended up tasting like Japanese food.”
Despite these difficulties, she said she her husband has given her many complements since she began taking cooking classes. “Sometimes I brought back leftover food and my husband liked it very much. He even began to ask me what I would be cooking the following week.”
After they finished the lesson, the women served themselves with the mackerel and some dessert. While they were eating, they talked about their families, in-laws and their difficulties living in Korea.
“Most of them have financial difficulties though Japanese women tend to be better off than other foreign wives,” Park said.
Park said many foreign wives could not return to their homeland. They don’t have the money for the trip and the husbands are reluctant to let them go. “The husbands are afraid that these women will not come back,” she said.
“Japanese people tend not to say what’s on their mind but Koreans are very direct,” said Takamura, adding it took time for her to understand her in-laws’ mindset.
At around 9 p.m., they cleaned up and returned home. Park said her free class is a rarity.
“These women are very humble. They have to deal with a different language, different foods and everything else,” she said. “There is not enough consideration for foreigners in Korea. The government needs to create more programs for these people.”
According to the Migrant Vision Center, Hanam city alone has 2,500 foreign residents. Park said she hopes that she could teach Korean cooking to foreign wives in other areas as well and that the community centers give her a hand to start such classes.