At Web portals,everybody can know your name

At Web portals,everybody can know your name 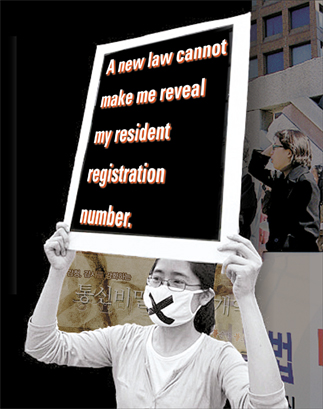 An activist from Jinbo Net. Provided by the group

Eom Sung-won, an office worker in Anguk-dong, did not consider himself to be the kind of person who posts comments on the Internet. At least until an online argument triggered his outrage.
It was an argument conducted via a Web message board, over the death of an old farmer during a violent protest. Among the postings were some that applauded the riot police who were alleged to be responsible for the man’s death.
Appalled by this, Eom called the writers “uneducated crazies.” The board was then inundated with insults and hate messages directed at him.
Eom said that the one saving grace was that he had not logged in to the site using his real name. Had he done so, he might have been more cautious about calling somebody crazy.
“I don’t usually write stuff on the Internet,” he said, hesitantly. “But if my real name was going to be revealed, I might think twice before I write something insulting.”
Eom’s response might be what Korean lawmakers are hoping to hear when a new telecommunication law, which was passed last month, comes into effect in July, governing some 33 million Internet users.
As a way to control the chaotic traffic of cyber space, the new law will prohibit users from logging onto a portal site, unless they use real names. Internet nicknames are still permissible, but the users will have to give their resident registration number when the nickname is registered. Those without a Korean resident registration number can use authorized certificates issued by a bank or a telecommunication company. The result will be that every user of an Internet portal will leave a trail.
“Of course, access to personal information will not be available to just anyone,” said Hahn Myung-ho, a legislative team leader at the Korea Internet Safety Commission, which has the authority to order corrections and remove obscene or violent materials from cyber spac.
Hahn emphasized the new law will help those subjected to malicious messages posted by anonymous users.
“Our coordinating department on libel disputes will thoroughly look at allegedly offensive materials,” he said. “If we find a posting defamatory, we have the right to ask the portal site to give the alleged offender’s information to the victim.”
The information will include the IP address and contact number of the offender. In the past, only the police and prosecutors had the authority to examine personal data and then only for the purpose of a criminal investigation.
The government’s move followed a sharp rise in Internet crime and the amount of offensive material found online that was accessible to children. A study by the Korea Internet Safety Commission found that 11,033 correction orders were issued to individual Web sites in 2001, but the number of warnings had quadrupled by 2006, reaching 44,289. The warnings were against contents that were ruled to be obscene, libelous, violent, related to illegal drugs or that threatened national security.
According to this new law, portal sites with visits from 300,000 users or more per day are obliged to change their system so that they can compel users to use their real names when registering for a message board. So far, most of the major Korean portal sites, including Naver, Daum, Yahoo Korea, Paran and Empas fall under into this category. A Web site that does not follow this order will be fined, but most companies have already started to demand personal information.
While portal sites are concerned that the new law will make customers shy away from using their sites, civic groups claim the government is misusing the law to increase its surveillance of citizens.
“When we are on the phone, we don’t ask the person on the other end to give their resident registration number nor do we demand their location,” said Chang Yeo-kyung, an activist for Jinbo Net, which advocates free speech online and is opposed to copyright. “Through the law the central government is trying to infringe on our right to privacy.”
PatchA Kim, another Jinbo activist, believes the law has a political motive.
“A similar real-name policy was introduced after the last parliamentary election [in 2004], limiting Internet users expression of their political views via online boards,” he said. “With the presidential election coming, the government is trying to stop people from speaking freely.”
Lee Sang-bae, the Grand National Party lawmaker who submitted the bill to the National Assembly last year, believes that Internet anonymity is creating an unhealthy environment, enabling the public to launch random attacks and witch hunts against each other.
Whang Sang-min, a psychology professor at Yonsei University, questions the effectiveness of the new law. He said he doubts the supporters of the real-name policy understand the psychology of the cyber- world.
“They need to understand what and where they want to regulate,” he said. “As more crimes are likely to happen downtown rather than in a residential area, they need to think whether a mere Web site with many visitors can actually be the kind of threat they imagine it to be.”
“What they are doing will be a waste of time and money because they are assuming that all Internet users, at all portal sites, have the potential to create what they think is unsound and obscene,” he said.