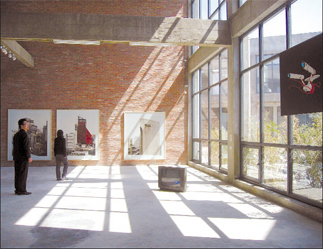 Korean artists are making their way into galleries in China, where European and American art had previously been dominant.
The new movement is slow but it is a notable change, considering that, in the past, even galleries in China with Korean owners had shown predominantly Western artwork.
PKM Gallery, in Beijing, which is owned by Korean-born Park Kyung-mi, became the first in the Dashanzi Art District to introduce Korean artists.
Since last Friday, the gallery has had “Fast Break,” an exhibition that displays the works of popular contemporary Korean artists, including Park Jin-young, Gong Seong-hun, Flying Fish, Kim Beom and Ham Jin.
“Through our exhibition, Korean artists have a large presence for the first time in a city where the art market has become very active,” said Park, the president of PKM Gallery.
But when PKM Gallery opened its Beijing branch last November, it opted for an exhibition of Western art, introducing work by 17 artists from New York with curator Dan Cameron. It was titled “New York: Interrupted.” Park explained that the exhibition had helped to increase the stature of the new gallery, located in the most cosmopolitan area of the art district.
“We earned a good reputation through Don Cameron’s exhibition and we were then able to do an exclusive show with two very competent Chinese artists,” Park said.
The Gallery Artside of Insadong also opened its Beijing branch over the weekend. “Over 40 percent of the floating population in Dashanzi Art District are foreigners and we are positive this district will be a new mecca for Asian artists, as an increasing number of collectors are coming to this district,” said Lee Dong-jae, the president of the gallery. “We are planning to hold exhibitions that show the works of both Korean and Chinese artists.”
Lee’s opening exhibition displayed original works in charcoal by Korean artist Park Sun-ki.
In May, the Keumsam Gallery, originally from the Korean art district of Heyri, will open its second branch in Beijing, bringing the total number of Korean art galleries in the Chinese capital to eight.
Keumsam’s exhibition will display works by contemporary Korean and Chinese artists. The artists include Kim Gwang-wu and Kang Ae-ran from Korea, and Li Hui from China.
“We are going to play the role of bringing Korean and Chinese culture together, and we will continue to look out for new rising artists who can represent the best work from both countries,” said Hwang Dal-sung, the head of Keumsan Gallery.
Smaller Korean galleries are expected to open in Beijing as well.
Former lawmaker Koo Cheon-seo, who is studying for a doctorate at Peking University, announced earlier that he wants to open a Koo Artcenter in Beijing, while another Korean gallery called Gallery Mook will probably open by July.
But critics say that promoting Korean contemporary artists may not be the most important reason why Korean galleries have changed their mind and turned positive about opening Korean galleries and exhibitions in Beijing.
Many believe that opening a Chinese branch will help galleries to have easier contacts with some of the most renowned Chinese artists and their art as more Chinese painting fetch record sale prices.
Zhang Xiaogang” 1993 “Tiananmen No. 1” is a case in point.
On April 7, the oil-painting sold for 15.4 million Hong Kong dollars ($1.97 million) at a Sotheby’s sale in Hong Kong, which was three times more than Sotheby’s estimate.