Dull shepherd has time on his hands

Dull shepherd has time on his hands 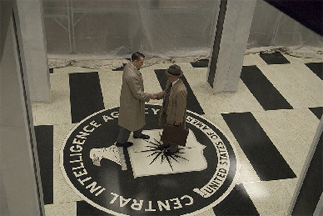 “The Good Shepherd,” the new Cold War spy drama that marks Robert DeNiro’s return to the director’s chair after 13 years, is long ―really long. And though it depicts much history, both national and personal, surprisingly little actually changes over its 167 minutes.
As the film opens in 1961 the CIA is engaged in its ill-fated invasion of Cuba. Agent Edward Wilson (Matt Damon) watches as the air support disintegrates and the troops are scattered. Flash back to 1939, and Wilson is a student at Yale, tapped to become a member of the Skull and Bones secret society.
The rest of the film operates in this fashion, zipping back and forth between Wilson’s past and the “present” of the ’60s.
Though dating a gentle deaf classmate (Tammy Blanchard), college-age Wilson must marry Clover (Angelina Jolie) after an ill-considered tryst leaves her pregnant. The Office of Strategic Services calls Wilson to Europe a week after the wedding, and his work subverting the Russian spy network separates him from his wife and son for six years, settting the tone for what becomes a a passionless relationship with his family.
The most striking thing about these jolts through time is Damon’s face. Though Jolie’s makeup and acting show her age advancing, Damon looks almost exactly the same, both in makeup and manner, in 1939 and in 1961, an irritant that undermines the film.
And yet, part of the point is that this protagonist does not really change. Wilson begins as a silent, untrusting loner and ends in the same place. He gains neither gravitas nor empathy over the decades.
The character of Wilson is based, though extremely loosely, on the life of OSS and CIA operative Richard M. Bissell, Jr., who masterminded the Bay of Pigs invasion, and Damon’s grim, bespectacled visage is probably modeled after Bissell. Yet though Damon does appear vulnerable at rare private moments, he never seems the fearful figure of the spy community that his Russian adversaries make him out to be.
“Good Shepherd” is not a primarily political film, but its secondary plot does make the predictable political points about the American spy organization. A few are still shockingly relevant ― the waterboarding torture and use of LSD on a Russian agent trying to defect, in particular ― while others are clumsy, such as a line in the film’s final moments comparing CIA operatives to gods.
This is a story of how social structures and organizations can guide the life of a weak-willed man, from a shotgun wedding to induction in the secretive Skull and Bones society to the spy world. It’s also a drama of family relations in the generation that fought World War II. Wilson’s aloof but caring moments with his young son, and his undying composure and restraint, all seem very reminiscent of his era.
The film is full of good performances, from Billy Crudup, Michael Gambon and others, but only Jolie manages to leave a lasting impression. Her passion is a wake-up call amid long minutes of stone faces. Though a sophisticated, worthwhile film, “The Good Shepherd” is still very long, and its substance, though considerable, doesn’t manage to fill out its hefty frame.