Fascinating festivals for May

Fascinating festivals for May

La Maestranza during a performance. The flamenco group will perform on May 10 during the Seoul Spring Festival. Provided by the festival

Warm weather and cultural festivities makes May one of the most anticipated months of the year.
This May is particularly exciting, with two intriguing festivals, the Seoul Spring Festival on May 2 to 13 and the Uijeongbu Music Theatre Festival on May 11 to 27.
Artistic director of the Seoul Spring Festival, renowned violinist Kang Dong-suk, is organizing the chamber music festival for the second year and chose folk music as its theme. Fourteen concerts are scheduled in addition to eight master classes at the venues, which include Sejong Chamber Hall, Seoul Arts Center, Hoam Art Hall and Naru Arts Center. There will also be a free concert at the Seoul Museum of Art at 12:30 p.m., May 10 and in Deoksu palace at 6 p.m. on May 13.
The concerts are themed with classical music of specific regions that emerged with the “nationalist school.” In the 19th century, nationalist movements prompted composers in Bohemia, Russia and Scandinavia to include ethnic folk music elements in classical music. The opening concert at the Sejong Chamber Hall on May 2 is titled “Folk Inspirations,” featuring composers like Bela Bartok, Claude Debussy and Antonin Dvorak, as well as Kim Jee-young, whose commissioned work for the festival, “The Darker the Better,” will premiere. Each day of the festival is dedicated to composers from countries such as Austria, Germany, Russia, France and Spain.
The highlights of the festival are the Borodin String Quartet and the flamenco group, La Maestranza. La Maestranza was founded in Spain in 1994 by virtuoso guitarist Jose Maria Gallardo del Rey, who is the leader and artistic director of the ensemble. The ensemble features seven instruments: flute, clarinet, viola, cello, double base, percussion and guitar.
Hailed as the guitarist of his generation, Gallardo del Rey lent his talent to different performances, such as opera, ballet, flamenco and jazz. 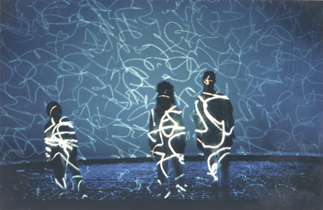 A scene from Heiner Goebbels’ “Hashirigaki,” which will be staged on May 11 and 12 during the Uijeongbu Music Theater Festival.

The flamenco concert will be at Hoam Art Hall at 8 p.m. on May 10.
The Borodin String Quartet, founded in 1945, consists of graduates of the Moscow Conservatory. The present members have been together since 1974. The quartet trained with Dmitri Shostakovich and became a distinguished advocate of the Russian classical tradition. Impressed with its defined performance, Shostakovich often asked the quartet to give private recitals of his new quartet pieces.
The guest pianist is Ludmila Berlinskaya, the daughter of cellist Valentin Berlinskaya, who is the oldest member of the quartet. They will perform at Sejong Chamber Hall at 5 p.m. on May 6 and at 8 p.m. on May 8. Ticket prices are 10,000 won to 40,000 won. Visit www.seoulspring.org.
Uijeongbu Music Theatre Festival is featuring 10 performers (five domestic and five international), a parade, free outdoor performances, workshops and seminars. The parade of circus groups, marching bands, Korean folk music bands runs from Jungang-ro street to Uijeongbu Arts Center, which is the main venue of the festival. The festival kicks off at 4:30 p.m. The 10 official performing groups are from countries including Switzerland, Chile, Argentina, the United States and Korea.
The opening act for the sixth annual festival is acclaimed composer Heiner Goebbels’ “Hashirigaki,” a Japanese word for flowing, script writing. The work is based on Gertrude Stein’s eccentric fiction, “The Making of Americans,” featuring the Beach Boys album “Pet Sounds” and Japanese folk music. Surreal movement, sound, lighting, props and projections make the piece exhilarating to watch. The show will be performed in English with Korean subtitles, at 8 p.m. on May 11 and 3 p.m. on May 12.
“Fabricando Sonidos,” (making sound) a non-verbal performance from Argentina, is the story of factory workers who use recycled materials to make sounds in chacarera, reggae and tango rhythms. El Choque Urbano theater group uses non-conventional instruments. The show is at 8 p.m. on May 22 and 23.
“Gemelos Twins,” based on Agota Kristof’s novel “Le Grand Cashier (The Notebook),” narrates the story of a twin in the context of war, abandonment and death. The three Chilean actors wear masks to stimulate the audience’s imagination.
The work was invited to the Avignon Festival in 1999. It will be performed in Spanish with Korean subtitles at 6 p.m. on May 12 and 13. Ticket pries are 15,000 won to 40,000 won. For more information, go to www.umtf.or.kr.