A day spent with the heroes of Hongseong

A day spent with the heroes of Hongseong 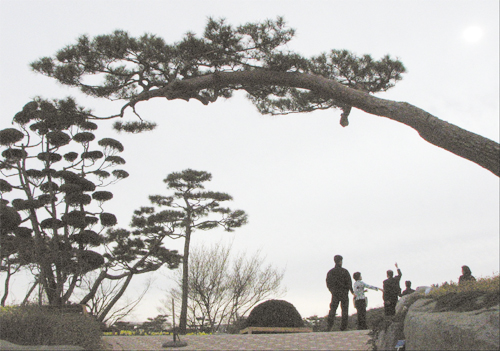 a family enjoying an early evening at the “Gallery in the Garden,”

HONGSEONG, South Chung-cheong ― Interesting people make any journey a much richer experience. This is a simple fact that I prove to myself every time I take a train bound for the countryside.
Jeong Su-geon, 75, is one such person. He lives in Hongseong, on the west coast, and he is the caretaker of Kim Jwa-jin’s birthplace.
Kim was an independence fighter in the early 20th century who was responsible for the first emancipation of slaves in modern Korea. When he was 18, Kim liberated 50 slave families by denouncing the Japanese occupation and burning the Hongseong slave registries.
Jeong’s job is to keep Kim’s old hanok clean and tidy and to greet visitors with a thunderous voice that some say sounds just like Kim’s.
“Welcome,” Jeong roared as he walked out of a small office next to Kim’s birthplace. Despite his age, he stood tall.
“You must be here to hear about the great deeds of Kim Jwa-jin,” he said. Jeong walked ahead into the Kim’s birthplace. “Can you feel the strong energy of a brave man?” He turned to look at me for an answer.
Jeong and the county where he lives are very proud of Kim, who was often called the “Korean Makhno,” a reference to the famous Ukrainian revolutionary who helped create anarchism in the 1920s.
Aside from Kim’s birthplace, which recently underwent restoration, a museum about Kim is due to open next month.
There is also an anniversary event to commemorate Kim. A monument to the fighter, who died at the hands of a Korean communist, is the first thing visitors see when they get off the train at Hongseong station.
Jeong said his work is voluntary. He had to pass a written test and an interview to become the county’s cultural guide, a position he has held since 2001, when the county government started to promote their town.
Hongseong gave birth to four of the 100 national heroes selected by the Korean government. Kim is one, and Jeong, a former school principal and teacher of Chinese, takes pride in that. The other two historic heroes from Hongseong are Joseon scholar Seong Sammun and Goryeo commander in chief Choi Yeong.
Unlike Jeong, however, Jeon Ha-su, a culture guide who greeted me from the old home of poet Han Yong-un (another Korean hero), was more concerned about the “ignorance of young students from the city.”
Jeon, a slightly built man who walked as softly as possible, particularly when near the ancestral shrine built for the late poet.
Although Jeon is not one of the poet’s relatives, he took the job because many of his favorite poems are by Han. He said it saddens him that many students do not have a favorite Han poem.

the caretaker at the home of poet Han Yong-un, talks about the life of the late poet. By Lee Min-a

“How can they understand modern Korean history without knowing Han?” Jeon said.
Like Kim, Han was also a leading figure in the independence movement during the Japanese occupation.
On the surface his poetry was about love, but, underneath, it was actually about patriotism. One of his collections was “Nimui Chimmuk” (Your Silence) published in 1926, which expressed ideas of equality and freedom that inspired readers to join the Korean independence movement. His work is featured in Korean high school textbooks.
“Why don’t you pay reverence to the courageous soul before you go?” Jeon asked me, pointing to Han’s ancestral shrine, which was built next to his birthplace. I demurred but, even so, Jeon rewarded me with a deep bow.
My next stop was the Galsan earthenware factory, which is famous for ash-glazed pottery made in the traditional style, using waterwheels and firewood. No chemicals are used and they claim food tastes much better when it's stored in their products. Galsan’s earthenware has been designated as a major intangible cultural asset.
I was very lucky to meet Bang Chung-ung, a Galsan master potter who uses techniques passed down through five generations.
“I don’t understand people making jars without these,” Bang said, as he busily turned a potter’s wheel with his feet. “These days motors turn the wheel automatically. There’s no soul to those jars.”
Bang said it takes three days for him to complete a pot, but, that way, his work gets all the attention and affection it needs.
He said people fall in love with his pots. Thus Galsan has many regular clients who drive to Hongseong. They have to make the trip because Bang does not sell over the Internet. 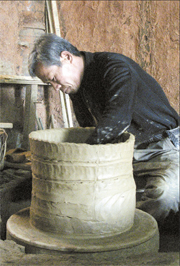 “Women come here looking for jars to hold their homemade ddoenjang [bean paste] or gochujang [pepper paste],” said Bang Yu-jeong, his daughter.
On the outskirts of the town, I had the chance to enjoy a cup of herbal tea with a man of endless paternal love who has lived through tragedy.
Im Jeong-ho is the proprietor of a 25-acre park filled with 460 kinds of trees and 870 types of herbs. He said his teas were extra thick with scent because he liked them to have a deep hue, like the color of the pine trees in his son’s paintings. Im, 64, is the owner of the “Gallery in the Garden.”
Tears filled Im’s eyes as he began to talk about his son, Hyeong-jae, who became a quadriplegic after a car accident when the young man was at college.
Because Hyeong-jae could not move, Im began planting trees for him to look at and the boy would often sit outside watching his father work in the garden. Im believed the sight of the flowers and trees helped his son feel better. That was 20 years ago. A mere garden turned into a park and became one of the most famous sites in Hongseong.
His son, however, started to paint, using his mouth to hold the brush. That was seven years after his father started planting trees. Now, at age 39, Hyeong-jae is a professional painter. Im built a gallery for his son in the garden. Hyeong-jae paints the flowers and trees his father planted and his work has won awards.”

“If only the asphalt roads inside the park were natural dirt,” I said. “The place would have been more beautiful.” But Im shook his head.
“Then my son would not be able to move his wheelchair,” he said.
Had I not met Im and the other devoted men of Hongseong, my trip to this small town would have been no more than a pleasant visit. Instead it was a day spent among heroes.

Travel
From Seoul, Hongseong county is a two-hour drive. Take the West Coast Expressway south until you reach the Hongseong IC.
Trains leave from Yongsan station and express buses from both Nambu Express and Seoul Express Bus terminals.

2) Seohae Bok & Agwi (West Sea Blowfish & Angler)
Blowfish cuisine is served in hot pepper or mild stew. Fresh angler fish is also served as a stew or a soup. The chef recommends blowfish cuisine for the early summer season. Each dish is 12,000 won per person. (041) 631-2179.