Too much coffee can ruin a book

Too much coffee can ruin a book 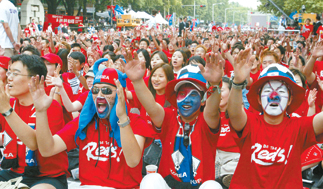 If you do a Web search for University of Central Oklahoma English professor Kevin J. Hayes, results point to an author of some proficiency whose careful research has won the respect of the academic community.
Hayes has written about American greats like Edgar Allen Poe and Herman Melville, as well as historical pieces such as “A Colonial Woman’s Bookshelf.”
Some of the elements that led to his previous success are also present in “A Peep Into Korea” (2006, Jang Rak Publishing House, Korea), but there is one important difference. It’s as if Hayes never got past the first draft before he decided to send the book to the publishers. Time and again, Hayes use of language gets in the way of what he is trying to say.
In “Peep,” Hayes tells stories from several trips he took to the Land of the Morning Calm over five years with his wife, Sooki, who is of Korean descent. At times, his observations are right on, such as when he describes some of the differences between Korea and the United States by reference to bathrooms, home heating systems and all the side dishes that come to your table when eating at a restaurant.
The things he notes, while not especially original, accurately reflect the impressions this country makes on visitors. While reading, anyone who has been inside a home or frequented society here will find themselves saying, “I noticed that, too.”
Certain chapters are very readable, such as the one about the friendships he formed with the children from his wife’s extended family.
His nieces take him to a video arcade where they play Pump It Up, an electronic dance game that guides you through the steps.
“After playing, they asked if I wished to take a turn,” Hayes writes. “I said no, but then, much to my surprise, I underwent a sudden and inexplicable change of heart and said yes. That poor machine, it had no idea what was headed its way. Used to the light step of lithe Korean teens, it now had to handle twice as much weight delivered with half as much delicacy. I am quite sure it had never felt the likes of this hulking American pressing down on it.”
In other parts of the book, Hayes descends into cornball humor that seems more like a personal indulgence than something that will benefit readers.
In a chapter about a visit during the 2002 World Cup, Hayes wrote that, “In the seven matches prior to playing the French friendly ― not to be confused with frenching a playful friend ― the Korean team was undefeated.” In what way does this enhance a story about the World Cup? Hayes is just trying to be clever and not doing it very well.
What may grab readers’ attention the most and distract them from the content, is his tendency to repeat himself. At times, it’s as if he does not really know what he is talking about so, like a college student trying to stretch his knowledge when answering an essay question, he repeats the question over and over again.
Although there are plenty, one good example of this is when Hayes writes about the development of Korea’s coffee culture from the days of the dabang (an early Korean coffeehouse) to the appearance of Starbucks on every corner.
On an early trip to an outlying region, Hayes finds himself unable to satisfy his daily cravings for caffeine.
“I craved the taste of good coffee,” he writes. “If good-tasting coffee were all I craved, however, the superdeluxe hotels where we began staying after my illness should have been able to supply it. The hotels did have good coffee, but the waiters never provided enough. The first cup came half full and when the waiters infrequently returned to refill the coffee, they only filled our empty cups halfway. I left the hotel breakfast table craving coffee almost as much as when I sat down. Clearly, I needed good coffee and lots of it to satisfy mind, body and soul.”
I’m not saying absolutely do not read the book.
If you are at Kyobo bookstore, have an extra 10,000 won and nothing else to read for an afternoon or two, go ahead. But be prepared to hit speed bumps that if they had been smoothed out would have made what is valuable about Hayes’ book more accessible.

A Peep into Korea