Ayo with soul, singing about her life

Ayo with soul, singing about her life 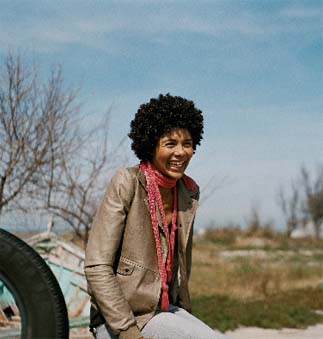 Ayo from the cover of her debut CD, “Joyful” Provided by Universal Music Company

The German-born singer/songwriter Ayo (her name means “joy” in Yoruba, the language of West Africa) appeared in front a crowd of more than 500 at the KT Art Hall on April 11, performing songs from her debut album “Joyful,” which is already a hit in Europe.
Ayo is currently on a promotional tour around Australia, Italy, America and Korea. She made an immediate impact on the Art Hall crowd, starting her mini concert with “Down on My Knees,” the opening track from “Joyful.”
Wearing a solid grey knit-dress and black leggings she used an acoustic guitar to turn the folksy song into a powerful ballad. She had soul and gravel in her voice singing such lyrics as “I don’t want to talk things out because there are certain things we don’t need to talk about. The silence in between will let you know what I mean.”
Ayo was born in 1980 and she has a unique accent, sounding part Parisian, part American and part African. During the question-and-answer segment of the Art Hall showcase, she talked about her Nigerian father and gypsy mother and her childhood homes all over the world, including Germany, Paris, New York and London.
The showcase also marked the opening of KT Art Hall which has now embarked on a series of jazz concerts. “All our paid seats [233] are booked through April,” said Sung Shi-won, one of the hall’s directors.
All the Art Hall’s proceeds will be used to buy hearing aids for children from low income families. During the showcase, Ayo recognized the art hall’s efforts by saying that this trip, her first to Asia, has more meaning because of this charity. The JoogAng Daily caught up with the musician by phone to hear about her future plans.

Q. Your childhood reads like the plot of a novel. It’s complex, nomadic and full of adventure. How has your background affected your music?
A.I was born and raised in Germany, but I move around to England, France and America. My music is a mixture of various cultures because of my complex cultural background. When I was a child, I didn’t really talk a lot about my family because I was embarrassed. However once I started to sing and write about my life, music became a kind of therapy for me.
I listened to music from a very early age because my father, who had come to Germany to study, was a part-time D.J. in his twenties. He had a very good record collection.

During the showcase, you mentioned that you had posters of Diana Ross on your wall. Who were your biggest music idols growing up?
I listened to Pink Floyd, Fela Kuti and Bob Marley. I also listened to Motown songs from the early ’60s and ’70s. I love them because they’ve got that natural kind of band sound. If I have to choose one, I suppose my biggest musical role model is Donny Hathaway.

All Music Guide described you as a “folk-soul chanteuse.” If you had to describe your music what words would you use?
I love folk music and also soul music, but I wouldn’t want to be held down to any style. I want to play soul, or rock or blues. Those genres are a part of me as well.

You are often compared to contemporaries like Corinne Bailey Rae and India Arie. How do you feel about these comparisons?
They are really great artists whom I admire. It’s a quick and easy comparison musically, but I can see that we are in the same market.
The lyrics on your album seem very personal. For example, on “Without You,” it is quite clear that the song is addressed to your father. How do you feel about the song?
Yes. My father dedicated his life to us and I want to express all my love and thanks via this song. Like other songwriters, my experiences inspire me and music helps me get more acquainted with myself and my family.

In “Life is real,” you sing, “Some people say that I’m too open...but I don’t mind...I got nothing to hide.” Looking back, do you think your work is too personal?
My life was not easy. However, I feel I’ve been through the worst part of my life and I’ve only got good things to look forward to.
I think that a lot of people can relate to these songs. Hopefully, I can touch somebody with a song.

What brought you to Korea? Do you have plans for future concerts?
This is my first visit to Asia. I was impressed by the Korean people. I feel that they are proud of their own culture. In many European countries, people are too Americanized.
I definitely want to have another concert in Korea in the near future.

Do you have any plans yet for your second album? If so, are you imagining a different kind of sound? Will you collaborate with other artists?
Since my album “Joyful” came out a year ago, I’ve been focused on promoting it. This year is all about touring and international promotion. As for collaboration, I’m always open to it. I’m not sure what my second album will be like; I just hope that maybe I can touch somebody with these songs and maybe it can help someone out there.

Ayo has an informative home page at ayomusic.artistes.universalmusic.fr. KT Art Hall is now holding a concert everyday, starting at 7:30 p.m, until August. The closest subway is Gwanghwamun station, line No. 5, exit 2. For more information, call (02) 1577-5599 or visit www.kthall.com.