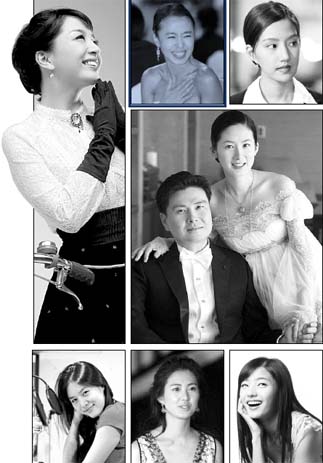 There are things to concede when you are watching evening TV melodramas about dazzling people. When heroines run into strangers, it’s fate. When they spill coffee over someone’s shirt, that’s fate too. A man can even run over a girl’s fiance, like in the SBS show “Crazy for Love,” and the girl will still fall in love with him, calling it destiny.
But these female celebrities can become irritating when they say they met their perfect other halves through a number of coincidences in real life as well.
Just last year, more than 20 female celebrities “happened” to marry rich, handsome businessmen. According to reports and interviews, actresses say they fell in love because “the man was very down to earth” and they had no idea he was so rich.
There is one additional factor to the celebrity marriage trend, however. The men the hot actresses choose these days are gyopos, a term for Koreans who have lived most of their life outside of Korea.
Out of the 20 wedded stars mentioned above, 13 chose to marry a gyopo, particularly from the United States, or a man who has live abroad for a certain number of years.
Actress Shim Eun-ha married Ji Sang-wook, who studied in the United States and Japan. Noh Hyeon-jeong, a celebrity announcer, married Jeong Dae-seon, a son of the Hyundai Group family who has been studying in Boston. Actress Jeon Do-youn married a businessman with an MBA from George Washington University. Actress Han Chae-young has been the talk of the town since her American gyopo financial expert fiance proposed marriage to her with a diamond ring worth $540,000.
Their “fate” usually occurs abroad while female stars are on vacation or when they fly out of the country to film in foreign locations. When actress Ko Hyun-jeong met her ex-husband in New York, she said it was purely by coincidence that the Shinsegae vice head offered to help her find her seats at the Winter Garden Theater because her English was so bad.
Singer and TV talent Ok Joo-hyun said she met Jeff Jang, the son of Hankook Ilbo newspaper head, in Los Angeles while she was there to make her yoga video.
When actress Kim Min came back to Seoul after filming the drama “Love Story in Harvard,” she was dating (and eventually married) foreign-based director Lee Jee-ho.
Even after these Korean celebrity and gyopo mates get married, they often make headlines in the celebrity gossip pages because they choose to give birth outside Korea for the child’s foreign citizenship.
Actress Lee Yo-won was publicly criticized for having gone on a “birth tour” after she came back to Seoul from New York, where she gave birth to a child.
The former announcer Noh is now wearing Lee’s shoes. She is currently pregnant and living in Boston, where she moved immediately after her marriage.
Despite the criticisms that sometimes go with gyopo marriages, the idea seems to be welcomed by many. Not only are female stars falling head over heels for foreign-based men, younger Korean women also prefer men who have studied abroad, a survey has found.
The survey, co-conducted by the Korean weekly Economist and the dating agency Purples, found the most preferred groom was a man who earned his MBA from the United States.
Second and third in rank were men working for international business or financial groups. In the past, doctors, lawyers and judges used to top the best groom list.
“A man’s financial status is an important factor in making him the most wanted bachelor,” said Joo So-young, a marketer at Duo, a matching agency. “If a man has studied abroad, it means he is financially stable so that makes him a plus.”
“They are also preferred probably because of the customs they picked up from Western culture, like being very considerate of ladies they date,” she said.