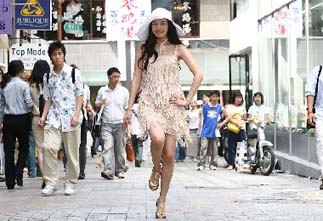 Strong images can be tempting, especially in cinematic tradition. The dilemma with commercial films is that no matter how convincingly they try to convey a meaningful message it can easily get lost within the framework of a genre or the style of a film.
In “200 Pounds Beauty” it’s evident that the director Kim Yong-hwa has tried hard to avoid praising the high standards of medical technology that have turned plastic surgery into something approaching an art form. His vehicle is the story of a woman who transforms her life through plastic surgery. Beauty isn’t everything, the film says, but that’s just the film’s way of offering a cliche instead of a conclusion.
Maybe it’s because the film, which was based on a famous Japanese comic book, was advertised as the first commercial film made in Korea to take a position on plastic surgery. Or maybe it’s because it stars Kim A-jung, an up-and-coming actress as the film’s heroine. Either way, the first half of the film was built around anticipating the glamorous lifestyle that was bound to become the heroine’s, by right, once her surgery is complete. In fact there is almost a sense of relief by the time Ha-na, the film’s heroine, goes under the knife.
“200 Pounds Beauty” is a story of a woman, named Ha-na (played by Kim A-jung) who makes a living working for a phone sex company and as a ghost singer for a top female star. In her dreams she nurses the hope that she will one day become a singer herself. Then she decides to undergo intensive plastic surgery, after overhearing a man she has a crush on gossiping about her looks.
But beauty changes everything. Just like the comment made to her by a fortuneteller, who tells her “face is a matter of fate,” the world is a different place after her surgery.
She flips her hair and pretends to shed tears after she crashes into an angry taxi driver. Smitten, he gives her a generous smile and a sincere apology even though the accident was her fault.
She attains everything she had wanted, including a new career and the man she had loved so dearly. She wonders whether she could ever go back to being the person she used to be, now that the world treats her so differently.
But she is facing another barrier. Her friend tells her that men think of women who underwent plastic surgery as “monsters.”
Her lover shares the same feeling about beauty. Pointing at a piece of raw fish with the tip of his chopsticks, he says he prefers “natural above cultivated.”
The film poignantly reveals the way beauty exercises its power in our society. At the same time it shows the duality of plastic surgery; the way society constantly reminds women that beauty is attainable, yet women who go through plastic surgery are condemned, because they challenge the male fantasy of effortless, natural beauty.
The film shows how women are consumed and discarded like a disposable product in a capitalist culture; a singer cannot debut without a pretty face, but even with beauty and style she will still be discarded when she is no longer popular.