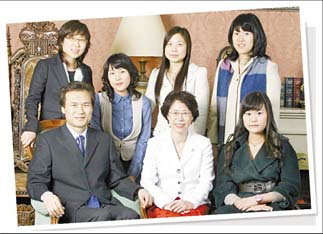 Assemblywoman Hong Mi-young with her husband and their five daughters.

I am 53 years old. My eldest daughter is 29, and my youngest is 28. I know it is unbecoming that I am getting married again at my time of life.
When I was 40 years old, I could not imagine there could be another marriage in my life.
I was trying to preserve my first marriage, because I knew that divorce is fatal for a Korean politician.
In the end, I had to choose divorce. I had even considered taking my own life.
My situation became less painful after a year had passed. I got into politics again and at the same time I met a very helpful guy. He had three daughters from a previous marriage. He supported me with the greatest of care.
I made a phone call to him after I became an assemblywoman. He said to me: “We had better not meet again, because you have become a member of the National Assembly.” With great sorrow I thanked him for his considerate attitude.
Back in the National Assembly I received a lot of phone calls, but none from him. One day my second daughter asked me, “Why don’t you keep in touch with him?”
After a few days I got a call from him. He said his younger daughter was worried about me. I asked him to become the president of our supporters’ association. I was thankful to him because he took care of me and helped me a lot. I had so many good thoughts about him.
I asked myself “Can I restart my life, even though I failed once?” I was afraid, but I chose a fresh start.
We usually met at my home. I wanted to get approval from my daughters, as our relationship developed. We had a betrothal ceremony in front of my daughters and my two sisters, at my home. He gave me a ring and kissed it, even though he had rarely expressed his feelings before. I was in a flutter. We went to church and had a dance lesson together. We also cooked dinner. However, he didn’t talk about marriage, even though we spent a lot of time together. He tried to read my youngest daughter’s mind, to see if she would accept him. I felt sorry for my family, and I was ashamed because we seemed to be in limbo.
The distance in our relationship narrowed when I helped his youngest daughter, who wanted to study abroad, and took care of his sick mother.
We felt like we were passing through a dark tunnel together when his mother was in hospital. We were both in tears when we heard that his mother was improving. I stopped thinking about whether I really loved him or not. I knew I did.
When we began to prepare for marriage, I needed to consult with everybody involved to create our new and complex family. I realized that I still felt betrayed by my ex-husband. My two daughters also had unresolved emotions. It understood them. I didn’t even ask them to apologize for their feelings.
And there were problems when my daughters and his met. They fought because they didn’t understand each other. I remembered that somebody said it is hard for children to win approval from their parents in the first marriage and acceptance by their step- siblings in the second marriage. But we solved our problems, one by one, by reading books and talking together.
We finally decided to have a public ceremony. We found a new home and borrowed some traditional clothes. And we tried to give our daughters important roles in the wedding. They brought flowers and blessed their parents’ future. My youngest daughter read a message which said, “May you parents have the good relationship even after 30 years. And we wish you happiness at all times.”
My husband and I read our marriage staements together: “We shared painful experiences. Now I am with you to embrace these painful memories. I will love you as if I didn’t have any pain in my past.”
I was deeply moved when his voice and my voice merged into one.
We attended a seminar on sound marriages after our wedding. Its message was, “Loving someone is about making decisions.” I admit that I sometimes don’t like him, but I remind myself, “Yes, I love him because I decided to love him.”