A knowledge of wine

A knowledge of wine 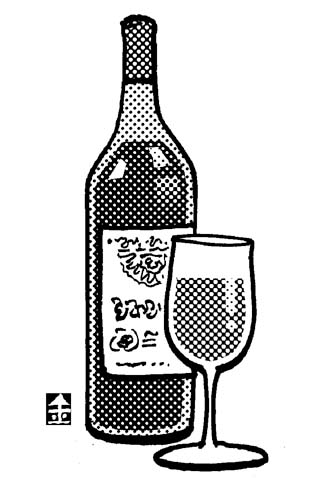 Many readers of the Japanese comic book series “Kami no Shizuku,” or “Drops of God,” which has sold several hundred thousand copies in Korea, wonder why the Chinese characters used in the Korean version are different from the original. The publishers explain that they substituted rare Japanese-style Chinese characters, but during the process, it became clear that the original connotation was lost. The substitution refers to a plain object like a raindrop; however, the original Japanese-style Chinese character is a sensuous poetic one used in phrases like “blossoms scatter like water drops” or “the starlight trickles like water Drops.” “Drops of God” in the original text means “the most treasured wine in existence.” The substituted character fails to convey the implication of the original.
The slightest variation in the title of this comic book about wine creates this level of commotion; similarly, wine is a drink that oozes complexity and eccentricity. The large number of “wasamo” clubs (gatherings of wine lovers) displays the extent to which wine connoisseurs are flourishing in our country.
Often referred to as the “greatest gift from God,” wine, which has been synonymous with culture and refinement, boasts a long history. Ancient Greeks thought drinking wine while engaging in debates separated them from the savages. The origin of the Greek word “symposium” means “drinking together.” As land for growing grapes expanded and mass production techniques for producing wine were developed, slaves started to drink wine as well, which prompted the noble class to place importance on vintage (the year grapes were grown and harvested). They further distinguished themselves by establishing etiquette for wine drinking (see “A History of the World in Six Glasses” by Tom Standage).
We live in times when conducting high-end business becomes difficult without a knowledge of wine, which explains why an increasing number of CEOs are becoming wine experts. Interestingly enough, Karl Marx cautioned more against people who did not drink wine than capitalists. An economic research center polled 400 CEOs and executive managers and found 84 percent felt stress regarding wine. They cited having to select a good wine for the dinner table and being unable to participate in wine discussions. Napoleon once said, “Nothing makes the future look so rosy as to contemplate it through a glass of Chambertin.” What would he make of all this? He might say, “Formality is important but first learn to enjoy the wine and slowly start from there.”