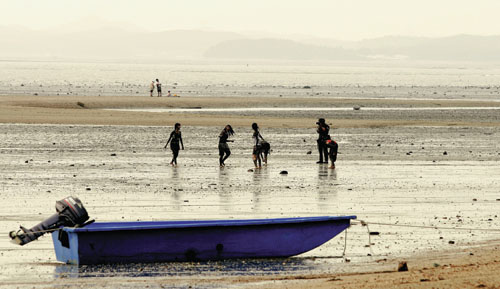 There is Jeju Island and there is Jebu Island, which is on the west coast, about two hours south of Seoul. The two should not be confused.
Unlike the well-known tourist spot south of the Korean Peninsula, Jebu is a tiny island whose entire area can be covered in less than 10 minutes by car.
The entire area is only 0.98 square kilometers (0.4 square miles) with a 12-kilometer long beach.
However, what is so special about this island is that the sea between the mainland and the island opens up every day ― as it does in other parts of Korea ― like the famous parting of the Red Sea by Moses in the Bible.
Jebu island comes from the word, jeyakbugyeong, a term used for people who carry young children and old men and women through the muddy flats between the island and the mainland.
Today a paved road connects the island to the mainland. However, the road is narrow and curvy.
As the road is very low, a vehicle that ends up in the muddy flats will be out of service for a long time, so beware. 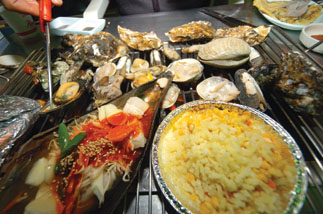 Clams and shellfish are grilled on briquettes at 40,000 won per couple. Prawns and octopus are also provided as side dishes. By Lee Ho-jeong

In addition, during high tide, visitors are not allowed to travel on the road because it is under water. That time varies from day to day.
Every visitor to the island has to pay a 3,000 won ($3.25) fee. Although many people travel to the island by car, a public bus travels there from the Suwon railway station.
The first thing many visitors to Jebu island seek is the famous jogaegui, which consists of various types of clams grilled over briquettes and costs between 40,000 won and 50,000 won for two.
Among the side dishes are prawns cooked in salt and small octopuses.
April and May are the best months to travel to Jebu island because that is when the clams and octopus are most juicy and fat.
The octopus, which comes as a side dish with most meals, is served seasoned with hot pepper paste. However, if necessary, don’t hesitate to ask the restaurant’s owner to serve it steamed or warmed up in hot water. And never forget to tell the owner to serve the ones loaded with octopus eggs.
Steaming round eggs flow out when the head of the octopus is cut off. The eggs taste best when they are dipped in a heavy Korean chili sauce called chojang.
Of course, when eating marine products such as clams and octopus, soju makes a good accompanying beverage.
A small reminder: never place oysters in the middle of the grill where the fire is strong because they will blow up with a thunderous sound and bits could fly off and hit someone.
Although there are many restaurants along the beach, some travel to the port area where the clams are enjoyed at semi-outdoor restaurants, where plastic sheets are the only thing acting as a roof.
This is a refreshing change from the normal restaurants people find, in which the smell of the salty air spices up the clam-eating experience and the port provides a beautiful scenic view.
Many take out their cameras to take photos after enjoying clams and soju. The tent restaurants close at night.
Another delight especially enjoyed on the island is bajirak, or short-necked clams with noodles.
The noodles come in a huge bowl with hot chilis included. They only cost 10,000 won for two people, but the taste itself is mind blowing.
These are especially good for those trying to recover from the heavy drinking that usually goes along with the clams. 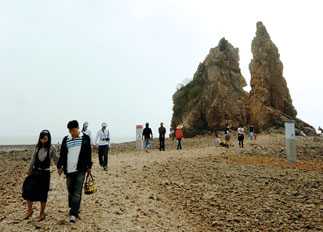 Young couples and families walking up to Maebawi (Falcon Rock). By Lee Ho-jeong

The muddy plains during the low tide are definitely an attraction.
Many visitors pay 1,000 won to purchase long plastic boots and tools to dig up clams where the water had been a couple of hours ago. Those who get bored with digging usually start mud fights.
Walking on the muddy plains in bare feet is dangerous as sharp sea shells are embedded in the silt.
Bamboo fishing poles are on sale for about 2,000 won. Worm bait costs 2,500 won and fishing boats can be rented for about 50,000 won per person. Prices may go up during the weekends.
Another attraction on the small island is the very tiny amusement park.
Still, it has the high-swinging Viking ride, bumper cars and a disco machine, where people have to hang on to bars while sitting on a round platform that tosses riders around in the air. The rides cost 6,000 won each for adults and 4,000 won for children.
If that is too much excitement, one can simply walk along the beach.
A long line of restaurants sits on land, with jumpy loud music and restaurant workers who try to wave at passersby or drivers in cars to get them to come inside.
The beach, however, is a beautiful sight, and very different from the ones found in the East coast.
Especially early in the morning, or on cloudy days, the beach at high tide has a foggy aura that makes onlookers catch their breath.
At night, many visitors fire cheap firecrackers that they can buy at any store along the beach. 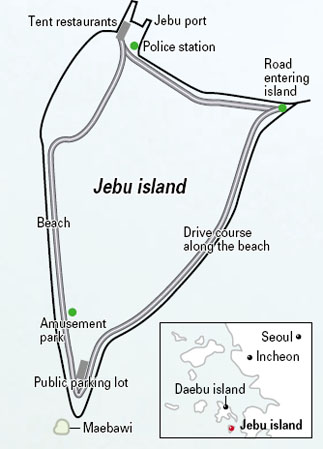 Every once in a while, a man on the sand serenades a woman on the road that runs above the beach.
There is one pharmacy, one police station and one elementary school on the island.
On the far corner of the southern part of the island are three famous rock formations called maebawi, which translates as “Falcon Rock” because, from a certain angle, it looks like a falcon.
More Koreans are traveling to the West Coast and many visit Jebu, so new accommodations have begun to pop up. The rooms fill up on the weekends, so it is best to call ahead to get a reservation.
Hotel rooms for two people cost about 50,000 won. Those with a kitchen cost 80,000 won or more.