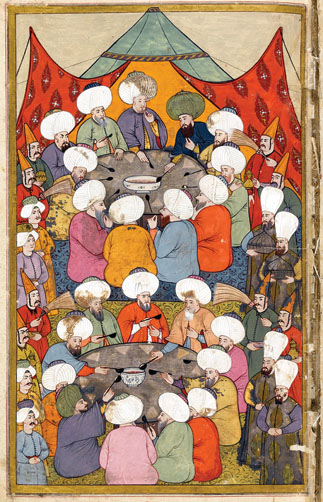 “Barbers’ Parade” a painting on a ceramic plate from Turkey circa, 1730. All photos provided by the organizer

After years of clinging to tradition, the organizers of the World Ceramic Biennale in Icheon have taken an unusual step. They have hired a publicity ambassador, a 25-year old woman named Lee Se-na. She recently became an Internet star overnight, after posting a video of herself making a bowl on a potter’s wheel that she said was a Valentine’s day gift for her boyfriend.
Her monologue was seen by over 1 million people, although Lee, a ceramics major at a local university, later confessed that the video was a sham, shot to test her acting skills.
Perhaps the biennale’s appointment of Lee was more than just the union of ceramics and the Internet, given that the two are Korea’s icons of tradition and modernity. It’s a new departure for ceramics to move from a marginalized area of fine arts to become an exposition of culture and industry established to encourage arts tourism. Maybe that explains this year’s title for the event which is “Reshaping Asia.”
One of the stark shifts in this year’s biennale is its departure from a stress on the purity of traditional ceramics to dealing in depth with the functional and industrial aspects of the craft. 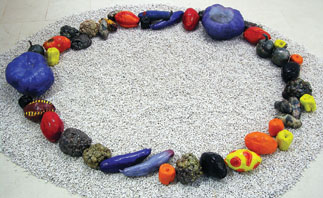 A ceramic installation by Kristine Michael will be on display in Icehon.

As an indication of this trend there will be, for the first time, a competition to select the best ceramic works and give prizes to the artists. And a display of ceramic products for use in everyday living was expanded with a new stress on increasing demands from the market. Both these were in contrast to the image of ceramics as a marginalized field practiced predominantly by women.
“In principle, ceramics should not be separated from life,” says Seo Jeong-geol, the biennale’s curator. “Ceramics are derived from life, and their purpose is part of life. Ceramics in essence shouldn’t be separated from its functional elements, even when they’re made soley for a decorative purpose.”
That’s not to say that the event has gone from being an art biennale to becoming a commercial fair. It has just shifted its focus to show the versatility of clay as a medium.
The fine art aspect of the show is still present. Artists will display works that show the current trend in modern ceramics. Many ceramic artists are trying to stretch beyond the idea of ceramics as objects with a functional use to focus more on works that display a dazzling array of techniques and emphasize the materiality of clay.
To get a glimpse of this evolving perspective, the organizers have devoted an entire section to contemporary Asian ceramics called “a skin of Asia.” It features post-modern experiments by contemporary ceramic artists who base their conceptual and technical approaches on Asian history. 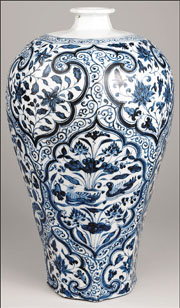 A Turkish vase from “Crossroads of Ceramics” in Gwangju.

“In its simplest form a vessel contains food or tea,” says the section’s curator Kang Jae-young. “But today ceramics also encapsulate a wealth of human imagination and social issues. They’re a means of creative expression that deals with issues ranging from diverse political subjects of our time to poetic and intimate stories that reveal aspects of the artist’s personal history. Contemporary ceramacists are no longer just craftsmen. They are anarchists and cranks who dream of utopia.”
Halima Cassell from Pakistan is described as having a “hybrid identity” and she expresses this through pieces inspired by a mix of African patterns with geometrical shapes derived from Islamic architecture; Julie Lluch-Dalena from the Philippines examines labor from a feminist perspective with a piece called “Tears Run when Dicing Onions.” that features a woman cooking on a summer day. In “Returning to Clay” Koie Ryoji, one of the first Japanese conceptual artists to use clay, presents an installation that focuses on the nature of clay before it is fired; Marian Heyerdahl from Norway uses terra-cotta to reinterpret the Ch’in tomb near Xian, China.
Another example of conceptual ceramics in the biennale is a display of vessels that are offered as aides to meditation and are inspired by the “slow life” concept that has recently become popular.
This section exhibits handmade bowls that are used by Buddhist monks to reflect their life of simplicity; paintings on ceramics that explore concepts of spiritual freedom sought after by artists; and holy vessels used in Roman Catholic churches and Confucian rituals.
One of the most intriguing exhibits at the biennale is a special display of Turkish ceramics which focuses on that country’s role as a center of trade and development in world history. 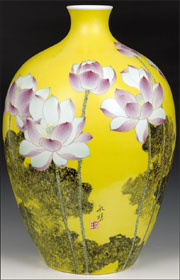 A vase by Pam Min-chi from the Ceramic House section of the biennale in Yeouju.

This section includes a large collection of works on loan from Turkey’s Topkapi Palace Museum in Istanbul and reflects upon how Asian ceramics have influenced Western art.
The exhibit pays a special tribute to Chinese porcelains, which were extensively exported to Turkey during the 16th century.
“Crossroads of Ceramics” is made up of two parts: the first part explores the ceramic trade between East and West and the cultural exchanges that transpired; the second part shows traditional Turkish ceramics from Asia by periods and regions.
Returning to a contemporary theme, the biennale has put together a “Ceramic House,” which shows the increasing use of ceramics as a stylish material for modern homes.
This section, which has been one of the most popular exhibits at past biennales, focuses on the uses of ceramics in modern living, ranging from wall finishing to table-wares that had been inspired by dishes used in royal banquets or major celebrations.
The artists try to work ambiguous meanings into the pieces to travel beyond the functional element of their works. This can be seen in products as commonplace as a vase, a candle holder or a tea set.
There is plenty to see here but those who are inclined can also get their hands dirty. During the biennale there will be several hands-on sessions that allow visitors to participate in the creative process.
“In the Joseon Dynasty practical science scholars like Park Je-ga stressed the spiritual attitude of potters and the influence that they would have on the lives of those who bought their works,” said Kim Ji-seon, the biennale’s assistant curator. “If only the potteries that are sold in our market contain the dignity of the artists, the minds of people will be just. It tells us that a single vessel that has been produced after a long process of meditation can calm a person’s mind just by looking at it.”


The World Ceramic Biennale starts tomorrow and runs through May 27. On Saturday and Sunday the Fourth International Ceramic Forum at the seminar room of the Icheon Ceramic Research Center will examine contemporary ceramics in East Asia. The biennale takes place at three different sites in Gyeonggi Province, about 20 minutes apart. World Contemporary Ceramics takes place in Icheon; Turkish ceramics are on display at Gwangju. In Yeoju there will be vessels for meditation, the ceramic house and the international competition. Airport limousine 7A travels from Seoul to the three sits, taking between 40 and 60 minutes. Admission is 5000 won. For more information call (031) 645-0530.

Based on archeological finds from mountainous areas nearby, historians believe that the ceramic history around Icheon dates back to the Bronze Age. Five ceramic kilns have been found that date from the Joseon Dynasty, while records show that the ceramicists in the region were sent as official artisans to work for the government in Gwangju, one of the biennale’s three sites and a home of the royal kilns for nearly 400 years. But many remains in the region were destroyed during the Korean war. In 1955 a group of art historians gathered to collect the remaining evidence of the ceramic tradition in the region. A ceramic village was founded during the early 1960s by artists who mostly worked with potter’s wheels. When the Korea-Japan treaty was signed in 1965 the demand for traditional Korean ceramics rose among the Japanese collectors. In Gwangju over 70 kilns and ceramic ateliers now operate and many offer weekend classes that cater to students from Seoul. Yeoju has a ceramic history that is just as compelling. Its heyday was back in the Goryeo Dynasty, where there was a wealth of kilns specializing in the production of white porcelain products. In 1932 a ceramic studio that was a subsidiary of a Japanese manufacturer was established in Ohak-ri, a county within Yeoju City. Its records reveal that artists were brought from Japan to work at the studio because there was a dearth of technical precision and materials to meet the level of demand. Despite these weak beginnings many ceramic factories were built in the region and Yeoju became the epicenter of commercial ceramics. Currently there are around 600 ceramics studios of varying size in Yeoju.