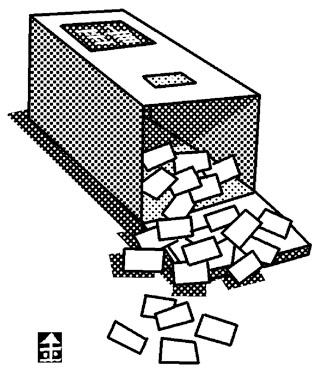 France will hold its presidential election run off on May 6. The results of the first round of voting are not a clear barometer of who will win. Second-round elections have been held seven times, with the second-place finisher winning the run off on three occasions.
Runoff elections seem foreign to us, as we have adopted a simple majority electoral process; however, mathematicians raise questions about an election process based on the simple majority. Professor Donald Saari states, “It is a system with the highest possibility of paradoxes.” (From “The Universe and the Teacup” by K.C. Cole) He contends that a candidate disapproved of by the majority has a high possibility of being elected. The results can dramatically change according to the number of candidates themselves.
During the 1987 presidential elections held as a result of the June Resistance, Kim Young-sam gathered 28 percent of the votes, and Kim Dae-jung garnered 27 percent. But they still lost to the eventual winner, Roh Tae-woo, who amassed 36.6 percent of the votes. The election could have been won if the votes had been consolidated into one candidate (Kim Young-sam or Kim Dae-jung).
Mathematicians contemplate ways to buttress this weak point. In the Borda count election method, voters rank the candidates, and each ranking is given a value and tallied; for example, three points for first place, two points for second, and one point for third. The method’s proponents contend the paradox incurred through simple majority elections can be avoided 1,000-fold when using the Borda count method.
Ireland’s electoral system is based on proportional representation. On polling day, voters indicate their first and second choices, and if the first-choice candidate does not receive at least half of the total votes, their votes are transferred to the second-choice candidate. Similarly, in preferential voting, voters rank a list of candidates in order of preference. Votes for the candidate eliminated in the first round are calculated along with the second-choice candidate. The second ballot electoral system allows voters to vote twice after eliminating candidates who fall short of the standard vote count and ranking.
Korea has elected many “minority presidents.” Presidents head for office having had more people vote against them than for them. Professor Kang Won-taek said, “We must employ runoff voting in order to reduce the possibility of a populist who has received fewer votes taking power.” Only then will we be liberated from the burden of choosing from a menu of disagreeable foods.