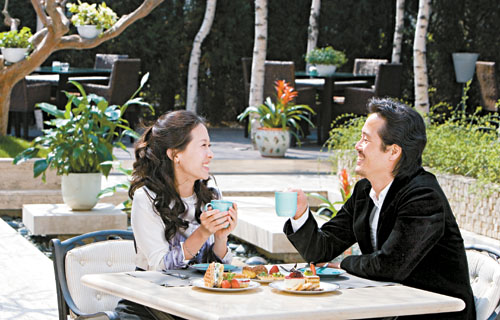 In 1990, instant coffee: A male student whom I loved secretly passed me a cup of instant coffee in a school library. The hand that held the cup was warm.
In 1995, hazelnut coffee: I was waiting for a guy I was meeting on a blind date in a cafe. The scent of coffee was the only thing that soothed my pounding heart.
In 2000, takeout coffee: holding an iced latte, I walked around the streets of Myeong-dong, central Seoul. The bright sunlight was as sweet as the coffee.
In 2007, what kinds of coffee should we drink? The answer is coffee with snacks. Coffee should not be served alone but with cakes, waffles, sandwiches and cookies. Coffee and snacks have changed the landscape of the street. We also tried out famous cafes serving delicious desserts.
When he is not in a rehearsal for his next musical, “Le Passe-Muraille,” actor Nam Kyung-joo visits renowned cafes with his wife, Chung Hee-wook. On weekend mornings, he drinks cafe latte and eats waffles for brunch and in the late afternoon he has a salad and then drinks an Americano. “I like coffee a lot,” Nam said. “Food eaten with coffee is a main course and a dessert at the same time. The combination makes me feel at ease.”
“Coffee goes well with sweets. They are like us, a perfect match,” Chung said.
Kwon Se-ryeong, 25, goes to a cafe during her lunch hour, instead of a restaurant. “I don’t like the feeling of my stomach being full. I’d rather eat a sandwich or a bowl of salad and drink an Americano at a cafe. I don’t need to order a cup of tea later. It is also good for staying thin,” Kwon said.
The coffee and snack culture has transformed the posh neighborhood of Cheongdam-dong in southern Seoul.
“Restaurants moved to Itaewon and Samcheong-dong for cheaper rents, and are being replaced by cafes,” said Oh So-rim, 32, who works in the neighborhood. “In Samcheong-dong cafe restaurants have become very popular.”.
“There are too many cafes and selling coffee does not make enough profit,” said Kang Sang-wook, the manager of Maison De Cafe in Myeong-dong. “Delicious snacks like cakes, sandwiches and waffles are what attract customers.”
According to the big cafe chains like Starbucks and Coffee Bean & Tea Leaf, snack sales are growing rapidly. At Starbucks, half their customers now order snacks. Last year, customers who ordered coffee and snack items accounted for only 30 percent. Starbucks expanded its selection of sandwiches this year and launched new tteok menus on Tuesday.
Fifty Paris Baguette bakeries have transformed their stores with a bakery and cafe. “The age of takeout is gone. Consumers want to stay inside the cafe and enjoy coffee and food,” said Kim Hyeon-ok, a public relations official at SPC, the operator of Paris Baguette bakeries. Ji Sang-hyeon, an employee of Beans & Berries cafes, said restaurants and cafes are becoming one. “Women in their 20s and 30s are leading the trend,” Ji said.
Professionals say that the tastes and preferences of customers are changing. “Young people are embracing American delis and Europe’s cafe culture,” said Kim Nan-do, a professor of consumer science at Seoul National University.
“The takeout coffee market is nearing saturation and the cafes are increasing their sales with snacks,” said a coffee industry official. “It’s a necessary diversification.”
“Some consumers take coffee as part of a new luxury culture,” said Kim Bong-seok, a culture columnist. “They are willing to pay 5,000 won for a cup of coffee and 10,000 won for a piece of cake. As the income level goes up, such trends will continue.”
The Hongik University area is always full of energy. On weekends, creative artists sell their works at a flea market and fancily dressed clubbers roam the streets. As new cafes open up, the scent of coffee filters into the crowded streets. Small cafes are on every corner of the streets between Sangsu station and the university and the Sanwoolim theater area. The cafes here are unique. Many of them use rare coffee beans and offer special snacks. The coffee and snacks in this area are more reasonably priced than in southern Seoul.

Chocolat Yum
This is a cafe owned by chocolate and cake specialists. A cup of coffee, priced at 4,000 won ($4.43) comes with cookies or a muffin. Grapefruit jelly cake is 4,000 won. The sour grapefruit juice in the jelly gives a fresh aftertaste. Fresh chocolate, white chocolate and dark chocolate are also popular. Open from 9 a.m. to 11 p.m. Parking is available. Visit www.chocoyum.co.kr.

Avec Nous
Three patisserie specialists here produce tarts and special coffees. Tarts made from seasonal fruits from Jeju island have the fresh taste and scent of the tropics. The popular chocolate or strawberry tart is priced at 6,000 won or 7,000 won. Coffee is brewed with Italian coffee beans using the Elektra brand coffee machine. They have natural shakes, which are a good substitute for meals. Cooking lessons are provided for 50,000 won. Open from 11 a.m. till midnight. Parking is available. Call at 02-324-1118.

Ann
The cafe has a cozy interior. A spaghetti and salad buffet followed by a selection of delicious cakes is provided between 5 p.m. and 9 p.m. on Tuesday, Wednesday and Thursday. It costs 12,000 won per person. The pumpkin soup with croutons is popular too. A piece of cheese cake, cherry sponge or tiramisu is 4,000 won or 5,000 won. Open from noon to 2 a.m. Parking is available. 02-3143-7030.

Oui
Oui is famous for its coffee. Customers can select beans from eight countries including Columbia, Guatemala and Ethiopia. They offer coffee filtered through paper, which has a mild taste, while “neldrip” coffee, filtered through a piece of cloth, is more bitter. The popular banana toast with strawberries is 4,000 won. The famous Oui Brunch, including scrambled egg, toast, bacon and sausages is 5,000 won. Open from 1 p.m. through 11 p.m. No parking. 02-338-0407.

The streets of Cheongdam-dong, the fashion center, have become crowded with cafes. They serve fresh cakes and sandwiches. There are many outdoor cafes on the opposite side of the Galleria Department Store and near Dosan Park. They have luxury interiors and long, pricey menus. A cup of coffee ranges from 5,000 won to 10,000 won. A piece of cake is 10,000 won or more.

Ceci-Cela
The cafe is patronized by fashion industry people and the store always smells of fresh baking. There are three or four types of cakes. The fresh carrot cake is popular. The cake has a lot of cream between tender bread layers and it melts in the mouth. Cheese waffles are a popular substitute for a meal. The coffee here is made from fresh beans imported from California and they also serve hot chocolate. Blend coffee is 7,000 won, cappuccino is 8,000 won, and a piece of carrot cake is 8,000 won. Weekend brunch set including coffee and waffle is 13,000 won or 14,000 won. Open from 11 a.m. to 11 p.m. Parking is available. 02-3448-7100.

Beans & Berries
This cafe, which opened in March, has over 60 items on its menu including coffee, tea, waffles and salad. Sweet Dream Waffle is made from dough and is deliciously chewy. The surface of the waffle is crispy and the taste of vanilla lingers in the mouth. The All Time Favorite Sandwich (it’s name on the menu) is a panini with cheese, ham, almond and marinated onions. For coffee, locally roasted Columbian coffee is blended with Guatemalan and Ethiopian coffee. It has a soft initial taste which is followed by a strong after taste. Cappuccino is 4,300 won; Cafe Marocchino is 5,300 won; the Sweet Dream Waffle is 8,000 won, and the All Time Favorite Sandwich is 7,000 won. Open from 8 a.m. to midnight. Parking is available. 02-541-1040.

Cafe Table
Table 2025, which is run by fashion designer Kang Hee-sook, charges a little more for a bigger portion. A piece of cake is 10,000 won to 12,000 won. The cakes come with ice cream and fruit and a single dish is enough for two people. Caramel banana cake is also popular. The soft banana, sweet cream and savory syrup go well with each other. The sweet and slightly bitter taste of black tea ice cream is refreshing. Green Tea Tart Cake is a best-seller. Salads cost 12,000 won and sandwiches are 14,000 won or 15,000 won. Open from noon to midnight. Parking is available. 02-518-9960.

Great
There is a garden with trees and flowers inside the cafe. It feels lovely sitting on a chair inside the cafe as sunlight comes through glass ceiling. The glass ceiling and the plant life make the interior feel like an outdoor garden. A large selection of breads and cookies are sold in one corner of the store. The tea brewed with lotus flowers is free of charge. With different menus everyday, the brunch buffet is popular and includes a plate of steak or fish salad. Brunch is 27,000 won during the week and 29,000 won on weekends. Pasta is 23,000 won to 25,000 won. Open from 10:30 p.m. to 2 a.m. Parking is available. 02-3448-4556.