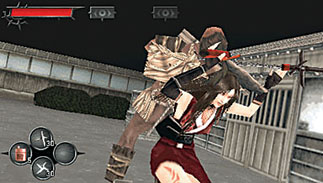 Shinobido Homura, the third of the Shinobido series and the first to be released on Playstation Portable, is definitely a keeper for those who love spy mission games.
Shinobido is different from similar ninja games because it is focused on stealth infiltrations of enemies’ bases or homes, rather than numerous random attacks on enemies. The basic story follows the Ninja assassin Goh and his partner Kinu, who are told to either assassinate their enemy’s bosses or kill all of their enemies.
Because it is a ninja assassin game, many of the kills are expected to be made silently and quickly, without other enemies noticing. If a stealth kill is not made properly, the player will be vulnerable to attacks from enemies. Like most ninja games, the action is breathtaking. The ninjas can dash along the side of the wall or make tremendous jumps. Too many flying ninjas, however, cause dizziness.
One of the entertaining features is that there are 30 characters that can be unlocked. Most of them are enemies the player has beaten up in various stages. There are 80 missions that can be chosen, of varying difficulty.
However, Shinobido Homura has several flaws, including the simple attack actions. Unlike its predecessors, where different attack styles and positions were available according to the situation, Homura’s actions are restricted to two or three attack patterns. Shinobido Homura basically follows the storyline of its predecessors, focused more on missions. Those who were expecting a strong storyline will find it disappointing. Also, it doesn’t take very long to clear stages. My last complaint is the lack of details in the map. However, this is still an exciting game. By Lee Ho-jeong

The recent release in Japan of the fourth game in the “Gyakuten Saiban” (“Turnabout Court”) series, known in the United States as “Ace Attorney,” has prompted a reduced-price Japanese printing of the first game in the series, which comes with an English version.
You play a rising defense attorney named Phoenix Wright, out to protect the innocent from a trio of corrupt prosecutors who aren’t afraid to fabricate evidence if it suits their cause.
The series’ unmistakable gameplay is divided into two parts: the investigation and the trial.
Since this is a Gameboy Advance port, the first four episodes make only rudimentary use of the DS’ unique features ― you can examine different locations with a touch-and-click system and shout “objection!” into the microphone in court (more fun than it sounds).
But the final episode, which includes almost all new characters and a new story just for the DS, includes several new features that weren’t on the Gameboy version (or, oddly, on the DS remake of the “Phoenix Wright” sequel). Movies are rendered in 3D, objects can be rotated and examined, and it’s also possible to spray luminol to search for blood and dust for fingerprints using the touch screen and microphone.
The legal battles, naturally, have no connection to reality ― everyone in the game would be arrested or disbarred by the end in real life ― and the characters are undeniably cartoony, making this a great game for kids who love the fun of a mystery, but not as good for adults craving a more mature atmosphere. But until the fourth game gets translated, this will still be the best in the series in the English language, so pick it up while it’s cheap. By Ben Applegate 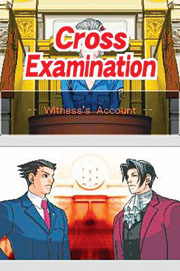