Games and movies play nicely together

Games and movies play nicely together 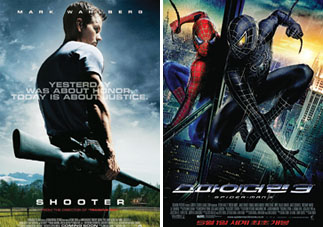 Posters from the movies Double Target and Spiderman 3. Provided by the companies

Many games have been made based on movies, mostly by big film studios that created similar versions of the same game for various gaming platforms. For instance, “Lord of the Rings” or the Harry Potter series were developed into PC, PS2 and Xbox games by EA, a major U.S. game publisher.
Game developers and movie makers, however, are now realizing that there is a closer relationship between movies and games. Especially when it comes to action movies, the film marketing people have realized that their target audience is largely made up of people who enjoy action games and they are thus using games to grab their attention.
Unlike other marketing strategies, this one gets target audiences involved by putting players in the position of being the protagonist of a movie. This creates an experience that is more visceral than simply watching a trailer.
For example, the movie “Double Target,” which arrived in theaters last Thursday, is hosting an event in connection with the first person shooting game Sudden Attack. The link couldn’t be more appropriate, since the movie is about a sniper. By finding certain “codes” found in movie promotional flyers, players can receive free weapons or special healing packs that can be used when playing the game.
The movie’s Web site (http://www.cjent.co.kr/doubletarget) also has some flash-type shooting games to draw viewers into the sniper experience. One is a training academy, where players have to shoot targets. In the first level, the targets are stationary and only 500 yards away, but as players progress the targets are pushed further back and begin to move. The other game on the Web site involves a situation where one must assemble a weapon and then shoot at a moving target from a long range. The target can only be detected by sudden glints of light in the distance and the player’s shots are affected by windspeed and their breathing.
Another example concerns the theatrical release of “TMNT (Teenage Mutant Ninja Turtles) 2007”. A downloadable PC version of the TMNT game was released on April 19. The service, however, is not available yet, but will be updated on the game portal section of Paran.com. 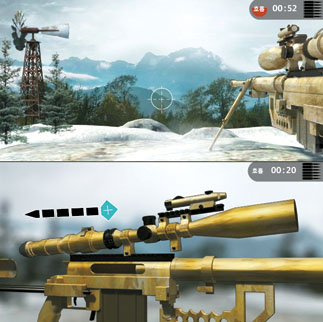 A screenshot of a shooting game on Double Target’s Web site.

According to KTH, which is distributing the game, the PC game was developed by UbiSoft, based on the game engine used for Prince of Persia. Unlike previous Ninja Turtle games, this version ― like the movie ― will have three-dimensional graphics complete with acrobatic stunts and will support combinations of various maneuvers.
Even before the upcoming theater release of Spiderman3, KTF and LG Telecom began servicing a mobile version of the Spiderman3 game last weekend. SK Telecom plans to start services of the game in early May. The mobile version is offered by GNC Interactive, which has, in the past, coordinated a number of cell phone games with movie companies. Most of the games were arcade-style two-dimensional games that used the scenario or characters from the movie, but not the actual graphics.