A tranquil form of autobiography

A tranquil form of autobiography 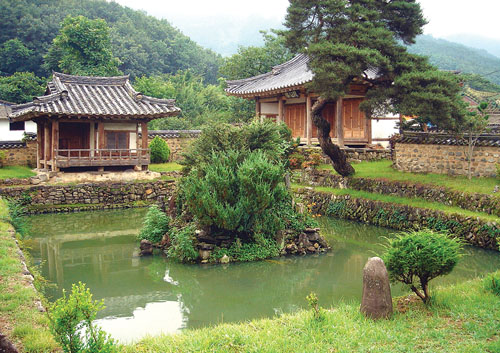 Mugiyeondang in Haman, South Gyeongsang province is a traditional Korean garden from the 18th century.


The American artist Robert Dash said that all gardens are a form of autobiography. This is an idea that applies to the gardens of Korea. Their layout and spirit tell us a great deal about the development of this country, especially the personality of its people.
When you step outside the house of the late poet and minister Yun Seon-do (1587~1671), on Bogil Island, near Haenam, South Jeolla province, it’s hard to tell where the garden ends, because it has no fence.
A few rocks are piled up to block a stream that flows down from the mountain; a small mound of rocks, with trees planted among them, has been built on the edge of the garden, to make a pond look more decorative: But the layout of the garden is far from being intricate or meticulous when compared to gardens found in China or Japan.
The earliest record of a Korean garden dates back to the Three Kingdoms period (57 BC- 668 AD), during the reign of King Dong-myeong. The term was used to describe a yard in the royal palace that was filled with peacocks and plants. 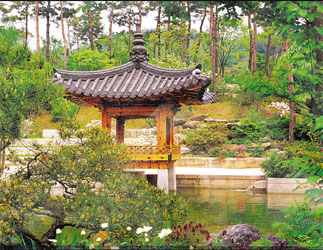 History tells us that Yun found his retirement home on his way to Jeju Island, after hearing news that Namhan Fortress had been occupied by the Qing Dynasty of China. The record states that Yun built a private garden at his retirement home because he was moved by the evergreen forest on the island.
Yun began a long line of Koreans who gave a site’s natural setting priority over artificial landscapes.
Heo Gyun, the author of “The Amazing Beauty of Korean Gardens,” writes that the sites for Korean gardens are often “chosen” instead of being made, as houses were deliberately built on lots with a view that could make a good garden.
“Koreans often sought a quiet place with a pleasant view near a mountain,” the author writes. “Once they found the site they built a pagoda and appreciated nature as it was, whether it be the sound of wind blowing through a bamboo forest, a reflection of the moon in a pond or the sound of water streaming down the valley.”
Remnants of traditional gardens provide evidence for this claim.
Anapji, which was built during the Unified Silla period in Gyeongju, features waterfalls in two tiers with granite basins and natural rocks at the water’s edge. 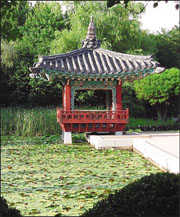 a private garden on Jeju Island

Soswaewon, a typical villa garden in Damyang, with a name that translates as “a garden of pure mind,” was constructed by Yang San-bo (1503-1577). It is adorned with a lush bamboo grove. A stone and mud wall surrounds the garden, which has a pond and pavilions near a natural rock valley.
Perhaps the best example of a traditional Korean garden that has been adapted to nature in its original state can be seen in the huwon (rear garden), also known as the “secret garden,” within Changdeok Palace.
It was built in 1405, behind a royal chamber, with a spectacular view overlooking a forest, stone bridges and a pavilion that sits in the middle of a lotus pond.
As is typical of Korean gardens, trees and bushes were kept as they were in nature, without excessive hand crafting; alterations were reduced to a minimum. The shapes of trees are irregular, simple and unforced, in stark contrast to European gardens, where trees and paths are heavily embellished to create a sharp geometrical symmetry.
That’s not to say that European-style gardens didn’t exist on the peninsula. During the excavation of Anapji in 1975, archeologists found that the entire floor of the pond was covered with pebbles to keep the water clear, a technique imported from France.
Historical records from the Goryeo Dynasty reveal that scholars like Lee Gyu-bo heavily criticized the decadent style of private gardens that were being built by some aristocrats and royal families of the era for “distorting the purity of the natural landscape in the search for secular pleasure.”
Perhaps one of the classic examples of the trend was pursued by King Uijong during the Goryeo era (918-1392). He ordered his servants to cover the pavilions of his royal villa within his garden with gaudy celadon roof tiles. 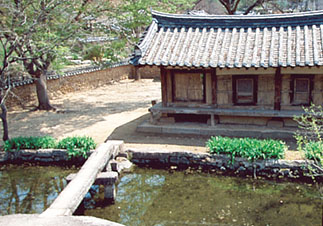 Huwon was also heavily altered and turned into an extravagant banquet site during the reign of Yeonsangun, who is often described as the tyrant king of Korean history. Extra layers of walls were added on top of the existing barriers to block civilians from peeking into the garden. This was considered an outrage, because traditional Korean gardens were thought of as sacred ground for natural appreciation, symbolizing fidelity and honesty.
The principal idea behind traditional Korean gardens is that humans and nature are one. Experts explain that the design of Korean gardens, indeed, was often a matter of philosophy rather than visual spectacle, and were heavily influenced by Taoist sanctuaries, which avoid artificiality at all costs.
A typical example of this trend is the absence of fountains in Korean gardens, because it was believed that water flows from above downwards, not the other way around. Instead, owners would occasionally set up a waterfall to appreciate flowing water, like the one in Anapji.
Natural details within a garden were endowed with specific meanings. Gingko nut trees were seen as a metaphor of a scholar’s mindset. A plum tree stood for the grace and integrity of an intellectual; a lotus flower stood as a sign of hope for scholars and teachers, as they bloom even in dirt. But one of the crucial traits of Korean gardens was the shape of their ponds ― usually a loose rectangle with a circular island in the center, which represents heaven and earth.
The gardens often served as inspirations for poetry as well. A series of poems by Kim In-hu, praising the natural beauty of the garden, are hung in the pavilion at Soswaewon. 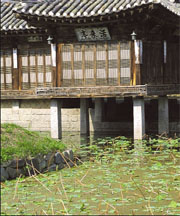 Pagodas in major gardens across the country often display short poems and proverbs on wooden plaques, a tradition practiced by the scholars of the time.
There is a famous garden within Dosan Seowon, the school that was run by Confucian scholar Yi Hwang. It says, “look at the point of the stream where the water current is swift.”
There are other phrases like “cleansing the mind” in Sesimjeong, and “recite this poem upon one’s return to this spot” in Yeonguidae, also the private garden of a school run by a retired scholar.
A common rule for all gardens in Korea was that they were always set up at the rear of a house. While backyards were used as a resting spot to dwell on natural wonders, the front yards were practical spaces to take care of domestic affairs such as drying vegetables or growing fruit and medicinal herbs.
Unfortunately the word “garden” in Korea has become a term that suggests barbecue restaurants with an outdoor terrace. To many, having a private garden has become an unimaginable luxury after the prices of the nation’s real estate soared. Most private gardens in Korean villas were torn down or damaged over the course of history.
On the outskirts of Seoul, Heewon, a garden created by Ho-Am Art Museum in 1997, is a rare find. It has a traditional Korean garden that has been restored to its original condition. Most of the other glorious gardens of Korea are now nothing more than a legend.