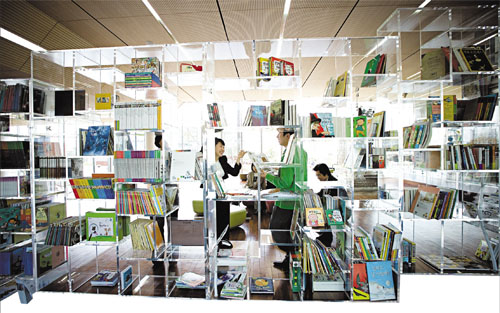 The library in the Woongjin Thinkbig building.


Hong Ji-oung, the president of The Open Books, was trained as a publicist. Books have been his life and he knew nothing about architects, public servants or military officials, but he brought together people from all these walks of life in his effort to build a “city of books.”
That was back in 1998. Now, almost a decade later, the nation’s first “book city” in Paju, Gyeonggi province, has grown into an industrial complex. Ground was broken on the project in 1998.
Seung Hu-sang, an architect who became the coordinator for the project, said Paju book city was a collaboration of different interest groups, using guidelines designed to prevent ill-conceived development. The most difficult task, he said, was to find common ground between the building owners, who insisted on designs that they liked, since it was their money going into the construction, and the architects, who complained that their creativity was being limited. Seung designed the street lamps and bridges for free in order to promote the project.
At first, building the book city seemed like walking a tightrope. It was similar to nursing an infant child who had been born too early. For a long time, the project’s survival was in doubt. There were a lot of concerns among the investors in the project and public officials who carefully monitored its development. Their anxieties proved to be unfounded. Today, some 130 publishing houses and 57 companies that are related to the business, including printing presses, have found a new home within the city. Where there had been nothing but fields is now a center of culture and intellectual endeavor.
Interestingly, unlike many other newly developed areas, where everything has been turned upside down, the development of the book city has emphasized harmony with the surrounding environment. There are no high- rises to block the scenic view of the mountains in the area, nor are their industrial plants to poison the stream that flows into the Han River.
Of course, there are some problems. A book designer who works within the complex refers to the area as “Siberia,” since it is a significant distance from Seoul; the weather is cold, especially during the winter when strong winds blow down from the hills, and, apart from publishing and printing houses, there are very few businesses. The designer says that if he works late, he has to pay a cab fare of 35,000 won to get back to his apartment in Nonhyeon-dong, southern Seoul. Additionally, the book city is not planted with many green trees, as artificial landscape architecture was excluded from the development plan. The designer complains that the building designs emphasize a unified style. “And this is not even a socialist country,” he said.
Some call the book city the second Heyri, referring to an art town in Paju, Gyeonggi province. The two areas are often compared to each other because they are located in the same province and because the architecture of the buildings in both areas is unique.
The two areas, however, have many differences. Heyri was established by artists based on their collective plan, but the book city is a government-designated industrial complex. Also, while the book city is an area that manufactures cultural products, Heyri is a town where culture exists to be enjoyed.
Consequently, the book city does not appear to be as friendly as Heyri. The buildings are colorless and the street signs give few details. As everything seems the same within the city it is easy for those not used to its environs to get lost.
However, everyone who visits the book city agrees that it is a huge museum of modern architecture. This response is especially strong among young people who appreciate the book city’s modernism.
The buildings within the book city are filled with minimalist art. The architectural oversight committee, led by Seung, played a significant role in adopting modern architectural designs for each of the buildings.
The committee considered every detail of each building, including materials and designs. The committee recommended the use of natural wood and corten steel (which oxidizes over time and changes color) and banned the use of granite panel cladding and glass-curtain walls. This decision was based on the philosophy that even buildings should change with the surrounding environment. Paint in flamboyant colors was banned and concrete in plain color was recommended. This was based on the belief that if the buildings were too colorful, the people within the buildings would feel overshadowed. 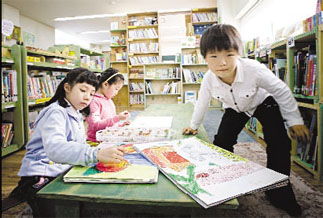 the children’s library on he second floor of the Daseossure building.

This is why the exterior face of the buildings within the book city resemble one another but, inside, they are very different. As the architects working on the buildings were given limited choices, they had to squeeze out every creative idea that came into their heads. As a result they constructed some breathtaking structures for the interiors.
For many visitors, gray concrete and red steel are not the most beautiful materials. Some say the buildings look cold and lack feeling. Regarding such comments Seung said, “it takes time.” He explained that many people have become used to the bright colors of major cities. He added that by the time the red beams turn black and ivy starts to grow over the exposed concrete, the book city will have some truly beautiful surfaces. 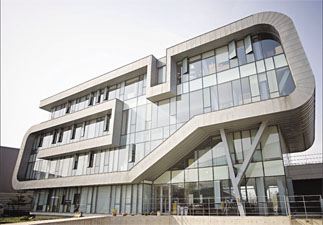 The book city is not just about publishing. There are several art galleries and many of the publishing houses display art in the open spaces within their buildings.
Gallery Lotus is run by Youlhwadang Publisher. Since it opened in 2004, the gallery has held various exhibitions featuring painters, photographers and book designers. Last month it held an exhibition called “Giacometti” by Choi Jung-tae. Admission to the gallery is free. It is open on Sundays but it closes on national holidays. See www.youlhwadang.co.kr or call (031) 955-7000.
Among the publishing houses, the Woongjin Thinkbig building has an exhibit of 20 art pieces related to books. One of the works is “Large Stonebook Tower,” a six-meter-high (19.7 feet high) piece made from 22 different types of stones collected from all over the world by a German artist. One of the most famous pieces is by the late Paik Nam-june. Called “Contrabass” it was purchased last year for 250 million won ($268,000). Information is available at (031) 956-7000.
In front of the Hangilsa building there is a sculpture of a bear riding a bicycle. The sculpture was made by Korean artist Park Chan-yong from aluminum.
Another of Park’s pieces at the same building is a man holding a whip as he tames a tiger. People working within the book city joke that the sculpture shows the relationship between publishing house bosses and their employees. There is also a huge stainless steel sculpture of a book with the words “The Sacred and the Profane,” written on it. Call (031) 955-2000 for more information.
Sjmap, which publishes more than 300 types of maps, has an open exhibition hall on its first floor where 20 rare maps are displayed. They include a duplicate of the largest world map available in Korea, which is three meters wide. From Friday to May 13 there will be a children’s festival at the book city. Sjmap will hand out free global maps to those who color in four different types of maps. At the company’s exhibition hall, maps will be on sale with a 20 percent discount. The exhibition is open from Monday to Friday and every other Saturday. It is closed on Sundays. For information go to www.sjmap.co.kr.
The book city has various areas aimed at young visitors.

On the second floor of Gimm-Young Publishers is a space where books can be read for free or purchased at a discounted price. Books that have been released within the last year are offered with a 30 to 60 percent discount. Additionally, the publisher offers various other cultural experiences.
There will be a paper puzzle event on Saturday, a history quiz on May 12, a children’s science experience on May 13 and, on May 26, there will be a lecture about how to stimulate a child’s interest in studying.
The Gimm-Young space is open everyday from 10 a.m. until 6 p.m., but closes on the Lunar New Year and Chuseok. Information is available at www.gimmyoung.com.
Yeowon Media, which publishes children’s books, runs a children’s culture center, with a 200-seat auditorium and a gallery that displays drawings from children’s books. It also has a library and offers a comprehensive tour of the company that includes the areas where the printing processes are performed. Reservations are required for the tour. Admission is free and books are given to children who participate. There will be a performance based on famous children’s books on May 5, 6, 12 and 13. For information go to www.tantani.com or call (031) 955-7660.
The Daseossure Publishing Company has a library on the second-floor of its building and runs a program that costs 10,000 won per month. It teaches children how to make their own books and book illustrations. See Cafedaum.net/playlibrary or call (031) 955-2625.