[Talk of the town]Japanese wave

[Talk of the town]Japanese wave 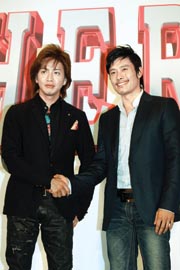 The sight of hundreds of thousands of Japanese fans waiting in line to get a glimpse of Bae Yong-joon in 2004 was a signal that the Korean Wave had swamped Japan. Last Thursday, however, hundreds of Korean fans, mostly women, showed up at Gimhae airport near Busan, waiting for hours to catch a glimpse of Japanese star, Takuya Kimura, top. “I have observed many Korean stars getting a warm welcome in Japan,” Kimura said. “But today, I’m the one receiving the hearty welcome.”
Kimura, 35, a member of the group SMAP, is one of the most beloved celebrities in Japan. He arrived in Busan for a six-day visit to film “Hero,” based on a popular TV series, in which he stars as a prosecutor. Shortly after he arrived he held a press conference, which attracted even more attention because he was accompanied by the popular Korean actor, Lee Byung-hun, bottom. Lee, who is also popular in Japan, although not as phenomenally so as Bae Yong-joon, makes a brief appearance in “Hero” as a Korean prosecutor who helps Kimura’s investigation.
Kimura opened the press conference with greetings in Korean, and praised Lee, saying, “Japanese fans call Lee the ‘prince of smiles,’ and he makes a warm impression on me as well.” Lee responded with a smile and said, “I hope my brief appearance in the film was helpful.” “Hero” is scheduled to open in Japan in September.