[Talk of the town]When it Rains, it pours

[Talk of the town]When it Rains, it pours 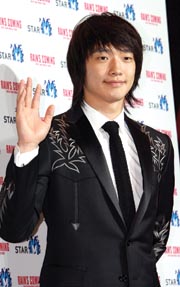 April was not a cruel month for Rain, also known as Be or as Jeong Ji-hun, his given name. Rain had plenty of good news, including the announcement on April 27 that People magazine in the United States, had selected him as one of its Most Beautiful People of 2007. It was particularly exciting for Rain, as he has devoted considerable efforts to making it big in the U.S. market. Earlier last week, at home, he won the Paeksang Arts Award for his starring role in “I’m a Cyborg, But That’s OK.”
In an interview with the Yonhap News Agency, Rain said that the fact he was selected by People magazine was a “dream-come-true” and “the hottest thing that could happen to me this year,” even there are eight more months of 2007 to go.
Last year, Rain was selected as one of the Most Influential People of the Year by Time magazine. This year, he is set to continue touring around Asia and the United States.