‘I used to pray to their souls’

‘I used to pray to their souls’ 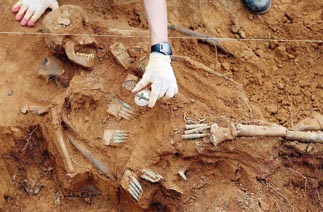 YEOSU, South Jeolla ― Jung Hyo-myeong, 73, stood near a deep, muddy trench last week in Hadong county, South Gyeongsang province, and watched as members of a Defense Ministry task force gently brushed earth away from a skeleton. The bones belonged to a young boy who had been one of Jung’s comrades-in-arms almost 60 years ago when, as teenagers, they fought an elite regiment surging south from North Korea.
Jung, from Yeosu, survived that battle. Some 80 of his fellow student soldiers did not. Their bodies were buried in a mass grave by local villagers.
Although Jung lived, the memory of his young comrades haunted him. Thirteen years ago, when he retired from his job as a bank manager, he decided to devote the rest of his days to finding their remains and ensuring that they received a proper burial. Last week’s discovery was the culmination of almost one-and-a-half decades of unstinting toil.
In an exclusive interview with the JoongAng Daily, Jung described the horrific battle he endured when, as a 16-year-old boy, he and his fellow student soldiers, with only 10 days of basic training under their belts, faced more than 450 crack North Korean troops.
And he tells of his lonely battle to find the bones of his fellow soldiers. “I used to pray to their souls that they would help me to remain healthy until I could find their bodies,” Jung said. “And I think that they answered my prayers.” 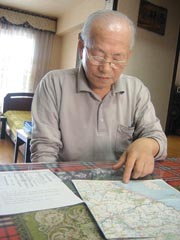 Jung Hyo-myeong has devoted years to finding his fallen comrades. By Chun Su-jin

Without Jung’s efforts it’s doubtful that the Ministry of Defense special task force, a permanent unit devoted to finding the remains of dead soldiers, would have been able to locate the teenage heroes. Jung searched fruitlessly for 12 years, holding annual memorials at the site of the battle. Then, last winter, he was told about a man who is the son of one of the villagers who dug the mass grave. The man was able to give him a precise location.
Although Jung’s initial quest is complete, he does not plan to stop, despite his failing health. He says there are other teenage soldiers lying undiscovered under the Korean soil they fought so hard to protect. And he says he cannot go to his eternal rest until he makes sure they have gone to theirs.