An Englishman’s view of life, in cynical colors

An Englishman’s view of life, in cynical colors 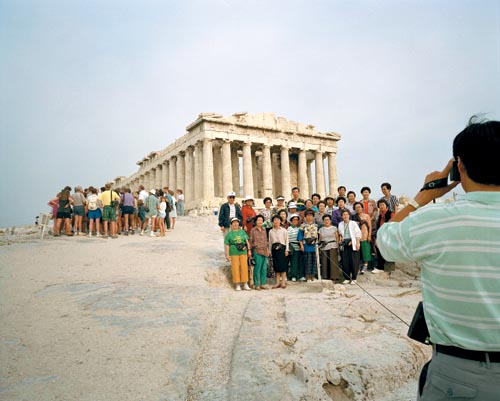 Martin Parr’s “Acropolis” from the tourism section of his exhibit. Provided by the organizers

Do Eddie Adams, Felice Beato, Henri Cartier-Bresson, Walker Evans and Martin Parr sound familiar to you? If so, you must be a fan of photography. If not, I suggest you head to the Hangaram Art Museum in Seoul Arts Center. Starting from today, the museum will host an exhibition of work by Parr, a British photographer much admired by his fellow snappers.
“Retrospective 1971-2000” was organized by Lee Ki-myoung, and the exhibition showcases 450 pieces, many of which were made with a unique and inventive procedure known as “Common Sense.”
Parr began his career as a freelancer and worked for many newspapers and magazines. In 1975, he won the Arts Council of Great Britain Photography Award and later became a professor at the University of Wales.
With an insight and vision acquired through a lifetime of work, Parr uses his lenses to depict a somewhat satirical and ironic view of the world. Parr uses different color techniques to convey his view and encourages people to think critically about the world in which they live.
The exhibition is divided into six parts: the first displays black and white photos of people and places from the 1970s, mainly in England and Europe; the second has photos grouped under the themes, “The Last Resort” and the “Cost of Living.” In this room, Parr depicts the folly of temptation, desire and luxury.
The third room, titled “Small World,” displays photos of tourism. Parr portrays how modern tourism has destroyed indigenous cultures.
The fourth room features Parr’s latest project, “Common Sense.” Dazzling colors are used in order to symbolize the fabricated world of today. Photos of daily life look foreign and extraordinary because of Parr’s technique. The fifth room is the “Reading Room” where the installing procedure used in “Common Sense” is explained.
The last room is special because it displays photos that Parr took in South Korea, North Korea and Panmunjeom, the truce village.
“Parr’s cynical view leaves us with a question mark on our minds,” said Lee.