Monteverdi mixed up with a lunatic asylum

Monteverdi mixed up with a lunatic asylum 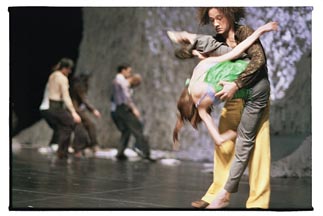 For the first time the work of Alain Platel, the Belgian stage director and choreographer, is to be shown in Korea, from May 25 to 27, at the LG Arts Center.
Platel's “Vsprs” made its debut in Paris in February 2006.
“Vsprs” has now been performed over 130 times in cities all over Europe. It was inspired by Claudio Monteverdi's “Maria Vespers,” sacred music composed in 17th century Europe, and footage of psychiatric patients filmed by Arthur Van Gehuchten, (1861-1914).
“Vsprs” depicts the life of estranged people and their relationship with religion.
According to the company’s press release, Platel has found common traits in the unlikeliest of combinations. The release says that Monteverdi's music and the film footage display the most extreme emotional states “in which self control is missing.”
The performance has been controversial, especially the last scene when the dancers simulate an act of masturbation.
In “Vsprs,” there are 10 performers from the Belgian dance company Les Ballets C. de la B and an ensemble of 10 musicians that play jazz, gypsy and Baroque music.
Platel has been innovative with his orchestration. The instruments that will be used for the jazz segments are drums, saxophones and bass; for the gypsy music the instruments are violin and double bass; and for Baroque, trombone and cornetto.
Platel said he mixed all three genres of music because Baroque compositions, according to him, are open to lots of changes and interpretations. He was especially interested in the idea of integrating jazz and gypsy traditions into baroque music.
Although it is Platel's first visit here, the dance company was introduced to Korea three years ago, at the LG Art Center with a performance of “Foi.”
The dance company was created by Platel in 1984 and was originally called “Les Ballets Contemporains de la Belgique.”
Platel was born in 1956, in Belgium, and made his debut in 1988 with “Emma.” Platel’s second work was “Bonjour Madame,” in 1993.
The director/choreographer put his dance company on the world map with “La Tristeza Complice,” in 1995 and “Lets op Bach” in 1998.

Tickets range from 70,000 won to 30,000 won. For a group of more than 20 people there is a discount of 20 percent. A 50 percent discount is offered to handicapped visitors. A student gets a 20 percent discount when making a reservation by phone. However, graduate students are not eligible for the student discount.
For more information call (02)2005-0114 or log on to www.lgart.com.