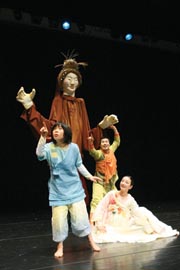 A scene from “Grandma Mago,” a play that features traditional Korean music, at the Uijeongbu Music Theater Festival.

Living in Seoul can be a blessing because places like Uijeongbu and its Music Theater Festival, which starts on May 11 and runs until May 27, are only a subway ride away. This year the festival has ten performances from six countries. Music and drama enthusiasts may want to hurry, because tickets are selling fast, according to the organizers.
The opening performance, “Hashirigaki” by Heiner Goebbels, is an avant-garde production that defies definition. This musical mingles different genres from traditional Japanese music to the Beach Boys. Even the starring actors have different nationalities. The orchestration includes elements from “The Making of Americans” by the American writer Gertrude Stein. Performed in English with Korean subtitles, shows will take place on May 11 and 12 at the Uijeongbu Arts Center, the main venue for the festival.
The festival also presents two one-man plays, “George Gershwin Alone,” about the 20th century American composer, and “Monsieur Chopin” about the 19th century Polish pianist and composer. Both are directed by Joel Zwick, the film director who is best known for the film “My Big Fat Greek Wedding.” Both plays feature the American pianist and actor Hershey Felder, who helped to write the scripts. Performed in English with Korean subtitles, the two performances were a success on Broadway and in Europe. “Gershwin” will be performed on May 19 and 20 and “Chopin” on May 16 and 17.
For fans of non-verbal performance, “Making Sound” from Argentina is enticing. This performance features samba and tango music. It will be presented on May 22 and 23, but one of the two performances, on May 23, is sold out.
Another recommended offering is from Chile. It is a puppet show, “Gemelos,” and it tells the story of twins. The performance will be in Spanish with English subtitles.
Korean music has an important role in the festival and there will be several well-known performers such as Kim Yeong-dong, who will appear on May 14. There is also “Grandma Mago,” a musical drama with traditional music that tells a story of a quest for a legendary goddess who created the world.
The festival will also have a series of free street performances, including the Dongchun Circus.
A visit to the festival will be enhanced by the popular Korean army soup with sausages, called budaejjige, which is a speciality of the area.
Uijeongbu has been host to a U.S. army base for several decades, and the theory is that Koreans created the soup, in less affluent times, with leftover sausages from the base. A festival ticket grants visitors a 10 percent discount at local restaurants.


Reservations in English are available at (031) 828-5846 or mjjee@paran.com. For further information, visit www.umtf.or.kr (English available).