Making a hearty meal from time spent behind bars

Making a hearty meal from time spent behind bars 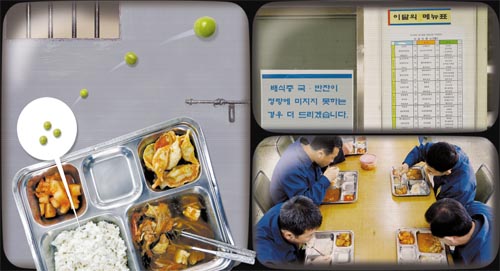 Rice is the national staple of Korea. There’s no sight more appetizing than a hot bowl of rice, fresh out of the steamer.
But if that rice contains beans, it’s another story. Why? Because for a long time, rice with black beans was served as the daily meal in prisons.
The dish conjured heart-wrenching images of punishment and was something nobody would want to eat if they could help it.
There are people, however, who eat this dish because they have committed crimes. They are breathing the same air we do. They will live with us once their terms are over. Since this is the case, I decided to experience a slice of prison life by eating the same food as they do. My experience, in an open prison in Cheonan, gave me a literal taste of what prison life is like.
To sum up the experience, the rice and black beans I had in the prison dining room was reminiscent of the food I ate 25 years ago during my military training in Nonsan.
As a general rule inmates at an open prison have committed minor crimes and are nearing the end of their sentences. The prison is not high-security. But the food isn’t so different from the tougher prisons across the nation.
The main difference is that, in an open prison, inmates have their meals in a cafeteria while in other prisons with tougher regimes, food is served in the cells, which have small tables. Instead of metal trays, the food containers and spoons in regular prisons are made out of plastic and match the number of inmates in each cell. This reduces the risk of accidents.
On a recent weekday, a little after noon, Jo Yun-seong and I were touring the kitchen facilities and dining room at the Cheonan open prison. A kitchen assistant stopped Jo to tell her they were out of sweet-and-sour dumplings.
“There is no left over food because we prepare and distribute the exact amount for every meal,” Jo told me. Then she hurried to bring a few dumplings to the table.
Nearby, rice and radish kimchi were on hot plates so the inmates could take as much as they wanted. Luckily there was soup left in the pot, and we were able to eat right away.
“There’s an old saying that life in a prison is full of hunger,” says Nam Gwang-jae, the director of Cheonan Open Prison. “Inmates can take as much rice and kimchi as they want. We used to have three side dishes, but now we have four. We serve the inmates equal portions of main menu items to prevent any fights over portion size.”
Some inmates had leftover food when they returned their trays, but the amount was far below the average seen in company or school cafeterias.
Rice with beans is no longer served in local prisons. Indeed, the beans were taken out of their meals 20 years ago. 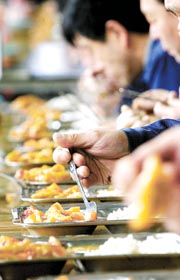 Until the mid-1980s it was mandatory for prisons to serve rice with beans, according to the Criminal Administration Act. Or more accurately, they served rice mixed with beans and barley. The beans were added mainly because rice was expensive at the time, and it was necessary to fill the inmates’ stomachs with an extra dose of carbohydrates. But the beans were taken out of prison rice bowls when the law was revised in 1986. Then barley and rice were served together in a 50/50 mix. Today, barley accounts for only 20 percent of the dish.
There are other false assumptions. Many Koreans mistakenly believe prisons put black beans in with rice.
But in reality, prisoners were actually served a type of soybean, which tints the rice yellow when it is cooked in a steamer. It’s rather unlikely that beans would show up in an inmate’s rice bowl.
A recent survey showed that the domestic cost of beans is 2,857 won ($3) per kilogram, whereas rice is only 1,971 won per kilogram.
“If you look at it from a nutritionist’s point of view, the menus for inmates are quite substantial,” writes Chung Hye-gyung, a professor of food and nutrition at Hoseo University. “Their daily intake is 2,600 to 2,800 calories, which is slightly above the average consumption of Koreans.
“Their meals contain 50 grams of sugar, 45 grams of fat and 100 grams of protein, which, respectively, represents 71, 14 and 15 percent of the sugar, fat and protein they require, according to the Health Ministry.
“These numbers reflect the goal of the prisons, which is to provide well-balanced meals so that the inmates have healthy bodies when they return to society.”
On the day of my visit the rice was mixed with barley. The taste, however, was slightly different from what you might get in restaurants.
Instead of using a pot, the rice was steamed in larger electric steamers. The pork and kimchi stew was more soup than stew. There were a few pieces of pork, and the broth was a bit thin.
The dumplings, which are deep-fried frozen products sprinkled with sweet and sour sauce, didn’t taste any different from dumplings anywhere.
The kimchi, which is provided from an outside factory, was of moderate quality.
The cost of a single meal for an inmate in prison is 2,860 won, counting the extra cost of fuel for cooking and the transportation of ingredients, which amounts to 380 won per meal.
That means the food itself costs 2,452 won.
A bowl of barley is 883 won and side dishes cost 1,669 won per meal. That’s about half the money spent in most company cafeterias. The quality and taste, however, do not fall too far behind.
One inmate who finished his lunch was generally satisfied with the food, saying, “If the chef changes, the taste differs a little bit, but it’s tolerable.”
The inmate’s menu changes on a weekly basis. The menus are carefully chosen by a nutritionist each month, based on what’s in season and what the inmates want to eat.
In Cheonan, a team of food experts ― the inmate representatives and the director ― hold regular meetings to enhance the food quality.
The food is prepared by inmate chefs using recipes provided by the nutritionists. That’s mainly because the facility has inmates who have obtained chefs’ certificates during their terms. Overall the food here focuses on nutrition rather than taste. 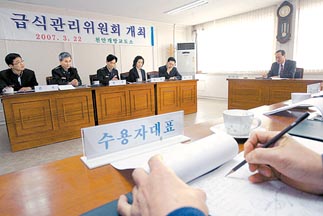 A committee that oversees the cuisine that is served in the prison. [JoongAng Ilbo]

A team of nutritionists and inmate chefs gather to check the freshness of the ingredients; all staff members are given sanitary garments and undergo strict training to prevent food poisoning. A rare touch is that the cutting boards in the kitchen are in five colors. Each board is used for different ingredients.
Spoons and trays are sanitized in 110-degree Celsius water, an extremely high temperature compared to the 65 degrees used in other cafeterias. The extra heat is used to guard against the spread of infection.
Gas use is kept to a minimum during cooking due to the risk of fires. Instead, electricity and steamers are used. When gas is used, a guard comes into the kitchen for special surveillance.
The sharp edges of all knives and scissors are blunted to prevent accidents or assaults. Crackers are stacked to provide nutrition should the food supply to the prison be interrupted for any reason. When their expiration dates near, they are distributed as snacks.
The prison serves nine special meals throughout the year, on New Year’s Day, Thanksgiving Day, Buddha’s Birthday, Liberation Day, Christmas and other holidays.
On average, special meals cost around 1,000 won more per inmate. These are also the occasions when inmates are likely to quarrel with the kitchen because they want more meat in their soup.
After spending a day in the prison mess hall, I now know one thing: The black bean rice we knew of old is the barley rice of today.