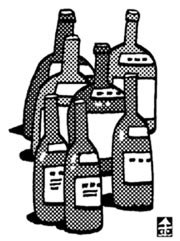 “Having one drink...having another drink...counting the number of drinks by pulling off flower petals ...,” sang Songgang in this drinking song. Li Bai, who called himself a “god devoted to liquor,” sang in his own drinking song, “From ancient times, sages are long forgotten, but the drinker leaves his mark in history.” Traditionally, good drinkers have been regarded with admiration.
People drink to enjoy a social setting; drink with the intent of becoming inebriated; and drink to become “supernatural.” However, complaints about society simmer beneath these spoken reasons as shown in the novel “A Society that Urges Drinking,” by Hyeon Jin-geon. Songgang’s longing for the king while in exile, and Li Bai’s misery after being expelled from his post by Gao Lishi underlie their works. During the Xia Dynasty, King Yu’s daughter discovered the way to make wine. King Yu would fall asleep after becoming intoxicated with the taste and aroma of his daughter’s wine, and eventually refused to drink saying, “Since it is so delicious, we must be wary that someone will ruin the country because of it” (from “Record of the Warring States” and “Stories of Chinese History” by Kim Hui-yeong). As he foretold, hundreds of years later, the last king of the Xia Dynasty, King Jie, ruined the country by holding frequent feasts.
The first scientific evidence of wine was uncovered at the Jiahu excavation site in China in 2004. They discovered traces of rice, honey and fruit fermented in Neolithic jugs that dated back to 7,000 B.C. They also discovered traces of wine in jugs dating back to 5400 B.C. in the northern part of Iran. The history of wine in our country is long, as well: Haemosu -- the son of the god of heaven -- intoxicated Yuhwa, who was the daughter of the water deity, Habaek, which led to the birth of Jumong, and Baekje’s Susubori (brewer) relayed the technology of making liquor to Japan.
The magistrate of Goesan County, Chungcheong Province, awarded three civil servants who were heavy drinkers a “Drinking Culture Prize” for their efforts in revitalizing the regional economy.
Is urging civil servants to drink the best way they can think of to revitalize the local economy?
In “The Chronicles of the Three Kingdoms,” Liu Bei had Pang Tong govern a small town, but Pang Tong drank everyday and avoided doing any work. He said, “I’m not an average Joe who should be bothered with ruling such a small town.” Instead of rewarding heavy drinkers, they should award hardworking average Joes.