In rural areas, the ‘silver culture’ is thriving with dance, gymnastics

In rural areas, the ‘silver culture’ is thriving with dance, gymnastics 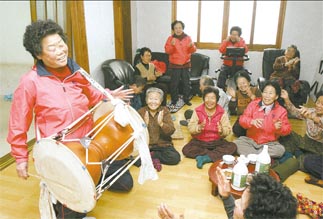 Staying active: The elderly of Songdong, Namwon, enjoy each others’ company at the town hall. The current silver culture activities sometimes include dance and gymnastics offered at town halls. By Oh Jong-cha

The delicious smell of sweet potatoes and pancakes fills the village hall of Chori in Suji county, North Jeolla.
A dozen elderly ladies chatter away while enjoying the freshly baked snacks.
“This is the joy of my life,” says one of the ladies.
Last year, Suji was the only county in North Cheolla province to have a zero birthrate.
More than 40 per cent of its population of 1,414 is over the age of 65. As the number of elderly couples grows, a new culture, known as “silver culture,” is starting to thrive.
In Chori’s village hall, people gather and spend almost the whole day together.
Everyone brings rice and food, and the “younger elderly” of the village take turns in preparing the meals. They genuinely seem to enjoy their time in the hall.
“By spending time at the hall, the elderly can enjoy each other’s company and even save on electricity bills,” says Han Byeong-yun, the head of the village.
In aged communities such as Chori, village halls also help to keep everyone’s health in check.
In Gimje, a nearby town, there is a group home built for the elderly. Eighteen elderly live and spend all their time together at the group home.
If someone isn’t feeling well, others at the hall take them to the hospital or contact their family.
Last month, a 24-hour hall for the elderly, Group Home, opened in Hwangsan, North Jeolla. Currently, 18 elderly people are staying together in the hall.
In the past, watching TV and playing Korean chess and card games were the typical way to pass the time in town and village halls.
However, new silver culture activities, such as dance and gymnastics, are taking over these town halls around the country.
In Sunchang, another county in North Jeolla, 20 people gathered in the town hall to participate in a dance program.
The program was carried out by the local health centers and will continue in other parts of the district.
In Songdong, Namwon, the elderly meet twice a week for gymnastic lessons.
This helps blood circulation and prevents palsy and dementia.
The lessons have been a success, and over 30 people participate in each session.
District and town councils are also creating posts for town hall program managers to foster a healthier culture.
In North Jeolla, 15 social workers will be dispatched to prepare health and leisure programs for each town. 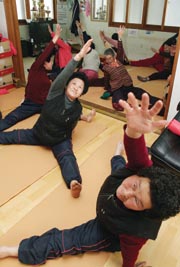 In some parts of the province, a new movement toward creating manufacturing communities at local levels has developed.
Recently, the elderly of Baebang village, also in North Jeolla, started to produce craft goods, such as straw sandals and crates.
Last year, they were able to go sightseeing with the 4 to 5 million won ($4,297 to $5,371) profit they made.
Similarly, in Sunchang, elderly ladies have started a business making homemade pepper paste and sweets.
The business has prospered and the sales have gone up to 20 million won since last year.
“The current trend of silver culture and town hall activities are the result of the rapid aging of rural communities around the country,” says Professor Song Jeong-gi, from the social studies department at Chonbuk University, North Jeolla.