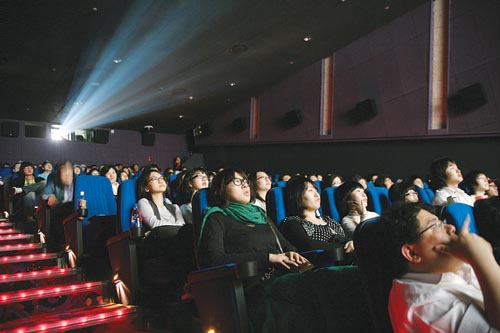 JEONJU, North Jeolla ― Pristine air, welcoming people, and some of Korea’s loveliest surviving premodern architecture and folk culture ― these are Jeonju’s perpetual treasures. But, once a year, this provincial capital with the heart of a small town hosts the Jeonju International Film Festival, which, by size, is second only to Busan’s.
Some complain that Busan has grown too big and somewhat commercial. To them, Jeonju remains the place for the serious cinephile, because it specializes in independent movies that would otherwise struggle to find an audience in Korea.
The festival continues until Tuesday and is perhaps the most cosmopolitan that Jeonju has produced so far. Alongside a wide assortment of Korean films, international indies and the Korean premiere of the big-budget Hollywood project, “Children of Man,” there are special sections that feature Turkish film and one that surveys the work of the provocative British documentary maker Peter S. Watkins.
The Turkish retrospective also celebrates the 50th anniversary of diplomatic ties between Korea and Turkey. It features eight arthouse films from various periods. Jung Soo-wan, the chief programmer of the festival, told the JoongAng Daily that this year has been a success because the audience has given a warm welcome to the special retrospectives.
The Jeonju program may be international in scope, but unlike Busan, it’s unusual to see foreigners in the audience. At a talk given by Park Chan-wook, famed for “Oldboy” and “JSA” and somewhat less so for “I’m A Cyborg, But That’s OK,” the film he presented at JIFF, there was no simultaneous translation. But the staff will bend over backwards to accommodate English speakers, and we were offered a personal interpreter ― if we agreed to exile ourselves to the back row.
JIFF’s five cinemas are within easy walking distance of each other ― and are on the whole professional and comfortable. The glaring exception is the Jeonju Academy Art Hall, which pipes films through a consistently awful sound system that muffled the pseudo-philosophy of Mamoru Oshii’s “Tachigui” and pierced the artful silences of Watkins’ “Edvard Munch” with a constant, infuriating high-pitched whine ― not to mention the cacophony from a rock concert just outside that destroyed the final hour. The video screening room was also a disaster, because it was only several footsteps away from the performance venue. We fought against a squeaking guitar and pounding drums while trying to appreciate a tranquil, philosophical Turkish film, “Motherland Hotel.”
Jung Soo-wan, the chief programmer, is well aware of the problems of noise pollution. The additional musical performances that took place this year were planned as an attempt to attract the general public, who are not cineasts, Jung said, but the attempt appeared to be good only in theory. “A film festival should be about movies,” Jung said, “After all, it’s not a music festival.” Of course. Jung said they had learned a good lesson and would prepare a better festival next year.
The festival tried hard to embrace those who are not particularly interested in arthouse films, showing all too commercial films such as “The Perfect Couple” on outdoor screens, but these efforts tended to alienate film festival enthusiasts.
No visit to Jeonju would be complete without a detour to the old town, the neighborhood just outside where the old city wall once stood.
It is full of hanoks, the traditional Korean house. Korea’s spiritual traditions collide in the hanok village ― the clan shrine of the Joseon dynasty Lee family is here, as is one of Korea’s oldest Christian churches, Chongdong Cathedral, where the first brick was laid 100 years ago.
There is also a stately Confucian academy, set under an ancient ginseng tree. The old houses themselves veil the workshops of traditional craftspeople and cultural museums focused on Korean liquor, old medicine, dance, music and more.
Hanji paper-makers offer visitors the chance to press their own mulberry paper, plus stationary and earrings. There are also ties woven from hanji thread and silk.
Screenings and seminars plus fine weather and a beautiful mid-sized city make for a relaxed filmgoing experience.
If you find yourself overwhelmed at Busan or tired of jogging back and forth to the scattered theaters of Bucheon, Jeonju is the place for you. Jung quoted the film director Park Chan-wook as saying, “There are just too many enticing films at Jeonju,” he said. “I should stay at the festival longer next year.” If he does, Park and other cinephiles will not be disappointed, Jung vowed. “We have more surprising ideas for next year,” Jung said, but she would not reveal what these are. “Please wait until next spring. One thing we can say for now, is that it will be better.”