D.J.s get hips wiggling on the Han

D.J.s get hips wiggling on the Han 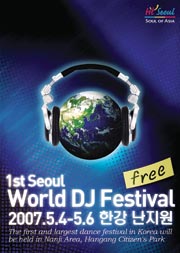 The Seoul World DJ Festival was billed as the first event of its kind in Korea.

Seoul is not yet a popular tourist destination on the global stage, but both residents and the city government are very aware of this fact, and are striving to make it a thing of the past.
Part of a stream of cultural promotions and development designed to drive this year’s Hi Seoul Festival seems to indicate that Seoul’s future as a world-class city is all but assured.
Under the somewhat unwieldy motto of “Ultimate Festival of Seoul ― Uniting its Traditions with the Future,” this year’s event was a new-and-improved celebration of all that Seoul has to offer.
The fifth annual version of the festival came into town along with summer-like spring weather, heralding the beginning of the hot season in the city with a huge range of parades, musicals, dancing, fashion shows, fairs and more.
As well as witnessing pagentry from thousands of years of Korean history, participants could cross the Han River in a hot air balloon or watch high-flying daredevils in the 1st World High Wire Championships.
The grand finale was this weekend in the form of the free World D.J. Festival, spread across Nanji Park, by the Han River near the World Cup Stadium.
It picked up where last year’s Dance Mania in Seoul (“the most popular of last year’s events among youth and foreigners,” according to the festival Web site) left off, moving to the much larger venue and extending the list of entertainment.
It was the first event of its kind in Korea, and the first in the world, according to the Web site.
As debatable as this last claim may be, the festival lived up to the “dynamic” and “sparkling” image the country is aiming to promote for itself.
Free camping was available next to the venue, and the campsites were quickly booked weeks before the festival.
The tent city next to the marquees of the festival created the friendly village-like atmosphere typical of such outdoor events, with the river sweeping by in the background and the music reverberating into Seoul’s night sky.
The three-day line-up of D.J.s and performers included the best of local talent, both expat and Korean, and famed performers from around the world.
Among the D.J.s was Matthias Roeingh, a.k.a. Dr. Motte, founder of the Love Parade, one of the largest electronic musical events in the world.
The Love Parade originated in Berlin as a political rally for global understanding through music, and has spread across the globe to cities as diverse as Tel Aviv, Santiago and Acapulco.
Musical pilgrims travel from around the world to take part in the Love Parade, and as such it is an example for Seoul’s festival to follow.
Also on the list was Canada’s Luke Fair, an up-and-comer who has opened for legends like D.J. Sasha and John Digweed, and was described in D.J. Mag’s top 100 as a “future hero.”
He filled the headline spot on Friday evening.
Israeli underground dance music chart-toppers Ruven, Ilan and Shmuel Flaishler, or the Flash Brothers, also performed on Friday night, fresh from a Brazilian tour.
San Fransico-based Claude VonStroke, the founder of Dirtybird Records and creator of hits such as “Who’s Afraid of Detroit?” and “Deep Throat,” came to Seoul for the first time for the festival, taking the main stage on Saturday night.
Backing up the imported talent was a string of the local Korean and expat D.J.s who help make Seoul’s electronic scene so vibrant.
Staples like J-Path, Guru, Kuma, Fujiwara, Oriental Funk Stew and M.C. Stride were all on hand.
The performances were by no means limited to electronic music. Local indie bands, hip-hop artists, drummers and dancers of all stripes filled out the entertainment roster. Some of the B-boys who have made a name for Korea in international competitions held daily dance-offs against Japanese dancers.
A side program to the main musical events was Seoul Arts City, a village created with the goal of displaying the contemporary Korean art scene in relation to the world, through paintings, displays and performances.
As is so commonly seen in Seoul, when the city goes to the trouble of putting on a big event, residents are happy to show their appreciation by coming out in full force. On both nights, beaming revellers filled the venues and the lights flashed across the Han River until the dawn began to break in the sky, showing that Seoul is truly “sparkling.”