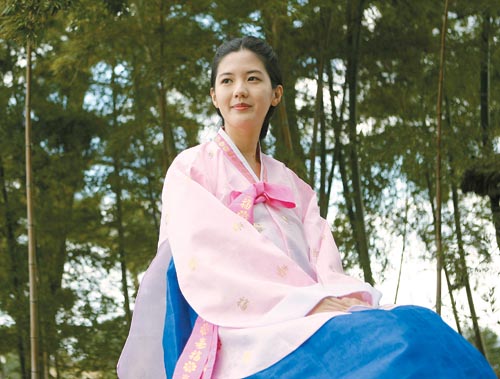 A young Korean woman in a traditional hanbok. The color arrangements of hanbok were based on the Asian philosophy.

20th in the series | Hanbok 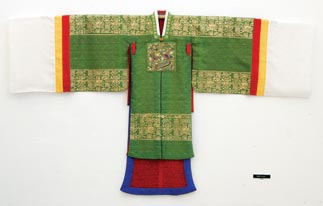 The wearing of the hanbok, the Korean traditional dress, is undoubtedly one of Korea’s most cherished traditions. Once worn everyday, it is now most commonly worn on special occasions, such as the Lunar New Year and Chuseok (Korean Thanksgiving), or at weddings and funerals.
Although most people in Korea today wear western suits or sneakers and jeans, the hanbok has a special meaning for many Koreans and that is reflected in the high prices, particularly for some of the more elaborate examples.
Many experts say that Korean hanbok makers, in an effort to reconnect with the wider public, are researching ways to integrate the hanbok’s essential elements with Western fashion.
Bae Young-ja and Choi Hye-yool, authors of the book “The History of Korean Clothes,” said the hanbok, which consists of pants and a jacket, has its roots in the outfits of the Northern Altaic peoples.
Considering that ancient Korea has its origins in Manchuria north of the Duman and Aprok rivers, it seems likely that early Koreans had similar lifestyles to those of Manchurians, which included hunting on horseback. Thus hanbok is designed for horseback riding, the narrow end of the sleeves in particular.
However, as Koreans adopted the fashions of China, the country created its own unique form of clothing, even though much of the Chinese influence was, initially, limited to the upper echelons of society, including the royal family.
The influence from China is especially strong in formal hanbok worn by officials of the royal court. 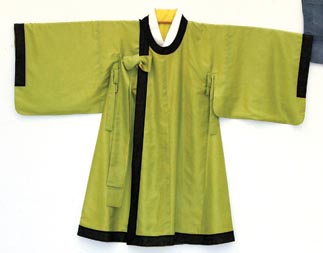 By the time Korea entered the Three Kingdoms period people had started to wear jeogori, a jacket or top shirt, and baji, which means pants.
This basic two-piece structure closely resembled the clothes worn in Manchuria and the elements are reproduced in the habok worn today.
In the early days of this period, as revealed in paintings on tomb walls from the Three Kingdoms era, women also wore pants.
Since the Three Kingdoms period a hanbok has consisted of yu, go, sang and po.
Yu is the top jeogori, and go is the baji. Sang is a lower garment worn exclusively by women.
The long dress is also known as a chima. This, according to Bae and Choi, came directly from China. Po, which is more commonly called durumagi, is an overcoat worn over the hanbok.
Added to the hanbok were gwanmo, which is a hat, dae, which is equivalent to a belt, and hwa, or socks.
Cho Hyo-sun, a former professor of fashion design at Myeongji University and the author of “Korean Clothes,” says the hanbok, which is traditionally made from ramie, hemp, cotton and silk, is unique and practical.
The defining trait of the hanbok, according to Cho, is that while Western clothes are cut according to the curves of the body, and are therefore designed to fit the person who wears them, the hanbok starts with a straight line. Then it is sewn to make curves that follow, but do not cling to, the human anatomy.
Therefore the hanbok gives a more leisurely and reserved impression that emits an air of humility.
The hanbok, because of its extra space, allows the concealment of bodily features and, since it is capacious, it gives more freedom of movement. Some of the areas are open to allow even more freedom of movement and, in the past, to permit the wearing of small daggers.
One of the biggest characteristics of the hanbok is its line. First, in the jeogori, the straight inner collar and outer collar are worn so that they make the shape of a “V.”
The mixture of straight and curving lines in hanbok not only allows for proper decorum but also subtle beauty. In the case of women, hanbok’s lines portray chastity.

The arrangement of colors in Korean hanbok also has significant meaning as it not only expresses Asian philosophy and belief but also provides information about the person who is wearing the garment.
In the hanbok, the Asian principle of dual cosmic forces and the five primary substances are incorporated in the arrangement of colors. The colors of the four mythical guardians are used as well.
The four directions, north, south, east and west, and the ohbang, which is the center, form the basic structure, which represents the yang, or positive energy.
And in each direction there are five colors deployed, which are the ying, or negative energy.
The five positive energy colors are blue, scarlet red, yellow, white and black.
The five negative energy colors are deep blue, green, poppy red, purple and ochre. These 10 colors are the basic colors used in every aspect of Korean culture, including the hanbok.
In the past, hanbok colors were arranged to represent the status and the condition of a person, including their age.
For example, young children and young maidens wore crimson chima with colorfully striped jeogori or yellow jeogori.
When a family sent the daughter to get married she wore a red chima and a yellow jeogori.
The newly wedded women wore a green jeogori over the red chima.
This same color combination is still worn on nationally celebrated holidays.
A woman indicates that she is married and has a son by wearing a scarlet red coat string that symbolizes the husband and a blue color cuff that represents the son.
Colors were also used in differentiating the gender of an infant child. The girls wore scarlet red coat strings and the boys had blue coat strings. Blue was also placed on their sleeves to indicate that the child was a boy.
The color arrangement indicated the age of the women.

Women in their 30s wore light purple jeogori with blue chima. Women in their 40s and 50s wore jade green jeogori with either blue chima or gray chima.
In her book, Cho says that today there are not many hanbok that follow the traditional color arrangement. The colors are arranged according to the person’s personal tastes.
There are four ways of decorating hanbok: jikmun, jikgeum, geumbak and su. Jikmun is a technique used in the process of making silk clothes. It repeats its pattern within the garment.
Since the decoration covers most of the surface of the clothes, it gives an intricate but subtle feeling.
Jikguem decorates the clothes with golden threads. It often decorates the edge of the long chima that covers the feet, or the collar of a jeogori . Unlike jikmun, jikguem decorations are more flamboyant and are designed to express different emotions.
Geumbak originates from jikguem. Instead of threads, geumbak uses thin golden plates and, using adhesive, the decorations are attached to the clothes. Golden powder is sprinkled on the decorations. It is a fast, cheap and effective way of getting glitzy decoration.

Su is a type of embroidery in which every thread is sewn using a complex technique that ensures the strength of the stitches. Unlike jikmun, su uses various colors of thread and it has a free composition. It provides liveliness to the decoration.
Koreans once gave great significance to images used in the hanbok. Popular images are the four sacred animals; the dragon, phoenix, turtle and kirin, a mythical creature. Other animal images include the crane and the butterfly, which represent long life, and bats, which symbolize abundant childbearing. The chrysanthemum was a symbol of longevity. The orchid meant friendship, apricot symbolized courage and nobility, bamboo meant integrity, lotus symbolized purity, grapes were the symbol of abundant fertility and peonies meant wealth.