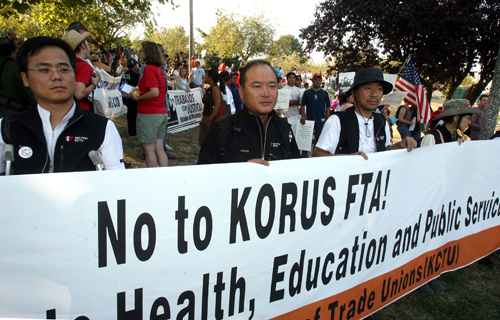 The Korean Alliance against Korus FTA went to Seattle in 2006 to take part in the Assembly for Human Rights and Economic Justice on Labor Day. [YONHAP]


The Ministry of Govern-ment Administration and Home Affairs on May 1 announced that it had chosen 155 projects proposed by 140 civic groups and would allot 4.9 billion won ($5.2 million) to them under “the 2007 nonprofit civic group support plan.”
The remaining 5 billion won of the 10 billion-won project fund will be used to support local civic groups through local autonomous organizations, and 100 million won will cover the costs for evaluation of the projects.
Immediately after the announcement, some press outlets pointed out that some organizations selected for government subsidies were among the groups that participated in violent protest rallies organized by the Pan-South Korea Solution Committee Against a U.S. Base Extension in Pyeongtaek and the Korean Alliance Against the Korea-U.S. Free Trade Agreement. They noted that it went against the clause stipulating the government would “stop supporting organizations with a record of participation in violent illegal rallies,” which the National Assembly attached to the budget during deliberations last year.
The government said on Nov. 24, even before the National Assembly added the clause, that it was going to stop violent illegal rallies at the source, in a statement that warned of “strict punishment against violent protesters,” directed at the organizers of anti-free trade agreement rallies. The government also ordered local autonomous organizations to exclude civic groups that oppose government policies from the list of government subsidy recipients.
Civic groups resisted the government’s measure, calling it a “hush-up of opposing views.” One newspaper criticized the government for suppressing the freedom of assembly and expression of civic groups by using the subsidy, and by painting most meetings and protest rallies on issues over which their opinion differs from that of the government as ending up in violent illegal rallies.
Regarding the points made by the press, the Ministry of Government Administration and Home Affairs said the selection of civic groups for the subsidy is not based on the disposition or opinion of an organization. It also said the Public Benefit Project Selection Committee makes the selection, meaning the ministry was not involved.
The ministry then quietly took a step back, producing a letter of explanation which said there were no problems because it adopted, before finalizing the selection of civic groups for government support, the National Police Agency’s criterion that “only organizations that hosted illegal violent protests and whose members were arrested and as a result are judged to be organizations that participated in violent protests.”
We must not overlook the fact that of the 15 Public Benefit Project Selection Committee members which recommend the civic groups that would receive government support, 12 members, except three recommended by the National Assembly, are members of the cohesive non-profit sector from the ranks of the civic groups. In this regard, there is a possibility that the “violence” coalition between the Pan-South Korea Solution Committee Against a U.S. Base Extension in Pyeongtaek and the Korean Alliance Against the Korea-U.S. Free Trade Agreement has been extended to a coalition of “cronies” that do each other favors. It is more than a plausible scenario when we consider the tendency among our civic groups to form “coalitions” among themselves.
According to the “General Survey of Korea’s Civic Groups in 2006,” the number of civic groups active in 2006 was 23,000, of which 6,490 are registered at central administrative offices and relevant city and provincial offices. Only these 6,490 registered organizations are qualified for government support. Since public announcements on projects that are promoted by city and provincial offices are made separately, the 4.9 billion won support plan is only for 788 organizations registered in Seoul.
This year, only 269 organizations, or 34 percent of registered organizations, applied for support. Judging from the fact that a similar situation is repeated each year, the original rationale for the project seems to be fading.
Major civic organizations such as the People’s Solidarity for Participatory Democracy or the Citizen’s Coalition for Economic Justice decline all government subsidies because they don’t want to compromise their independence.
However, the civic group support plan is basically a lifeline for small organizations that belong to a group of minor players in the nonprofit sector. For them, a project that guarantees a minimum of 10 million won is equivalent to 30 to 70 percent of their annual income.
Due to their often difficult financial situation, they frequently resort to expedients like diverting project funds to expenditures for organizational operation, and producing business plans that have nothing to do with the organization, or flimsy reports. Yet, most of these shortcomings are overlooked by society due to paternalism. Now is the time to re-examine cool-headedly whether taxes paid with the people’s sweat, which amounts to 10 billion won each year, are being wasted recklessly to benefit a few civic groups.

*The writer is a professor of NGO studies at Kyung Hee Cyber University. Translation by the JoongAng Daily staff.