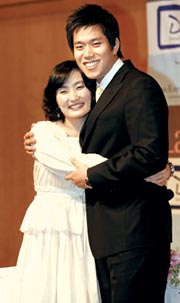 Park Kyung-lim, a comedienne who rose to fame using her coarse voice and unusual looks, had other women green with envy last Friday. At a well-attended press conference, she unveiled her groom-to-be. He is one year younger than her and has a hot job at Samsung. The fiance, Park Jeong-hun, 27 said, “She looks so pretty to me. I love everything about her.”
Park first met the comedienne when she was the M.C. of a matchmaking show on KBS-TV, titled “Introduce Somebody Nice to Me.” Mr. Park was the hot bachelor seeking his Ms. Right but, instead of the female contenders, he somehow ended up with the M.C.
The comedienne made the first move, giving Mr. Park her private phone number after the show. It took Mr. Park two months to call but, once he did, their relationship developed quickly.
According to Ms. Park, the couple had one major crisis when she feared that her fame would ruin her fiance’s private life. Ms. Park said her fiance told her not to worry because he would do his best to “be a reliable man whom you can depend on.” Ms. Park said his answer made her cry with joy. After the press conference she had no time for tears because she was busy posing with her groom-to-be.
The couple are scheduled to tie the knot in July, at a Seoul hotel.