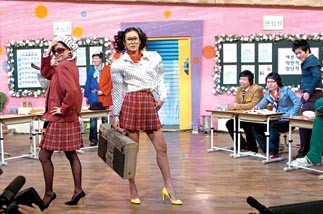 A scene from “The Six Viragoes,” which recently ended its three-year run. [KBS-TV]

A total stranger recently told me that she loves me. I don’t know her name or her face. All I know is that she works for directory inquiries. I happened to call the telephone company to find a phone number and that was enough for her to confess her love. I learned later that it’s her company’s policy to get closer to their customers.
I wanted to ask her who she thought she was to love me, a total stranger. Yet I decided against it ―the poor creature was obviously in enough pain, having to recite “I love you” to every single customer. I took a deep breath and said, “Thank you.” End of conversation.
Civic groups should do something to stop this infringement of human rights. Those poor girls should have the freedom to avoid insincere declarations of love.
Ruminating on the awkward aftertaste of an unwanted “I love you” message, I happened to glimpse my toilet paper, which I had just purchased in a two-for-one deal. There were tiny words printed on the tissues, which I had not noticed earlier.
The messages were “Be wealthy,” “Keep healthy” and “Be rich,” printed in Korean and English. I would appreciate it if the toilet paper company could cut its costs ― and prices ― by deleting these unwanted messages.
Rather flustered by the thought that I have months to spend with my “Be rich” toilet paper, I turned on the television. I was once more confronted by an unwanted message: that we should be sad about the end of “The Six Viragoes,” a long-running segment from the the KBS2-TV show, “Happy Sunday.”
Featuring six female celebrities or would-be celebrities, the show ran for some three years and got laughs from then idea that the starring women defy the frail image of the fair gender. Yet, all they did was play games with their male guests.
Some of the six viragoes were glib-tongued comediennes. They would tease a pretty boy guest on the show by saying, “Don’t worry, this sister will look after your career.” Such an approach was a refreshing concept in this world where women try so hard to exploit their traditional feebleness. Yet, it was a double disappointment when those viragoes began making silly jokes and dance moves designed to seduce the guests.
For the last episode, the six viragoes took their act to Saipan, the resort island, but what they did was not so different from their performance in Seoul. They featured native male dancers and started doing dance moves that they might find alluring.
I don’t want to be mean, but I have to say that it seemed more like a scene from a documentary on the mating of animals in Africa. The difference between the mating rituals of birds or lions and this show was that it featured a handful of Homo sapiens.
The scenes were just too unsightly and too vulgar to be shown to children under 13. Furthermore, the women even started to talk big about how the native guys looked so young, and their meaningless chitchat went on for several minutes. By then, I decided against changing the channel, because I wanted to check how far a TV show can delve into the world of ugliness and stupidity.
The show reached its nadir when it wrapped up with the six viragoes sitting around a campfire in the dark confessing how precious the show had been for them. The six viragoes all burst into tears, blew their noses and sang songs together. They looked so sad to end the show, but I was glad that it was over.
Then I was attacked again by another unwanted message that KBS-TV has launched a show that is almost like a spin-off of the series.
Titled “Hi Five,” it features five women with an all too similar concept to that of “The Six Viragoes.”
Well, some TV shows just never die.