The Seoul jazz man has a mean beat

The Seoul jazz man has a mean beat 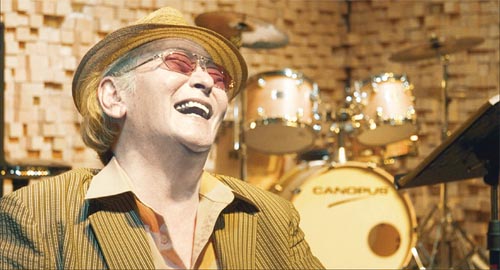 When a photographer asked Choi Se-jin, also known as Rudy, to move closer to his drum set, he went into a furious rage. “You don’t know anything about drums!” yelled the 76 year-old drummer, his eyes flashing behind his sunglasses. “He then sat down to do what he loves to do, beating the drums with his sticks, playing an impromptu jazz beat. It was then that his face lit up.
For the last 60 years the drums have been been Choi’s life and jazz has been his history.
“It is when I sit at the drums and start to beat out a tune, that I truly feel happy and at peace,” he said.
Last month Choi released the first album of his 60-year career, called “Back to the Future.”
“The idea actually came from one of my fans,” he said. “They posted a question on my personal Web site asking where he could get a recording of my performances.” 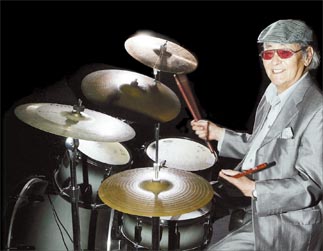 Choi in his performance with a young pupil. Provided by Choi Se-jin

Choi said the question made him realize it was time for him to release his own album.
“They say a tiger leaves his skin behind when he passes away, so, in the same spirit, I wanted to leave an album.”
Choi said he called the album, “Back to the Future,” because he likes the movie of the same name and he wanted to have a similar relationship with his pupils as that of the film’s professor and the young skateboarder. Choi’s students accompany him on the album, which has 14 tracks, including jazz classics like “Sing Sing Sing,” “Speak Low” and “I Love you for Sentimental Reasons.”
“I had to do all the chores at home to get the funding for the album,” Choi said. According to the jazz musician, his wife controls the family’s finances and he needed to convince her that the album was a good idea.
The first jazz song that captured Choi’s heart was “Sing Sing Sing,” performed by Benny Goodman. He was 15 when he heard it on a radio in Insadong. “My heart was pounding,” he said. “I wanted to play, so I picked up two tree branches and started to reproduce the rhythm.”
Music was a huge part of Choi’s life while he was growing up. His uncle played the clarinet. By the end of the Second World War his father had opened a music store in Sokcho, Gangwon province.
The first instrument that Choi mastered was his uncle’s clarinet. He abandoned the instrument because his father thought wind instruments were unhealthy. As a result, the drummer credits his father with his career as a percussionist. Choi said his professional career started not long after he first heard “Sing Sing Sing.”

Choi Se-jin in his practice studio

In 1947, at 16, Choi joined a band formed by the famous jazz singer Kim Jung-ku. “I was passing a building in Namdaemun when I heard music. It piqued my interest and I sneaked in. It turns out it was a practice room for Kim’s band,” Choi said. “When I thought the practice room was empty, I sneaked in and played the drums. I was caught by Kim, who asked me if I knew how to play. I told him that I could and he asked me if I was interested in joining a band.”
Although he was in Kim’s band, Choi did not tell his father. For many Korean parents back then performance artists were regarded as“tanttara” or “low class miscreants.” For this reason, Choi’s father didn’t like the idea of his son becoming a ttanttara. Choi says he still remembers the day his father accepted his chosen career.
In 1954 Choi performed “Sing Sing Sing,” at a jazz concert held at the Theatre Scala, in downtown Seoul. It was his first on-stage performance. “I didn’t realize that my father was in the audience, and, during a break I ran into him,” said Choi. My father simply told me to follow him with my head down and my mouth shut. I thought I was going to get it. He took me to a nearby restaurant and asked me what I would like to have. When the food came he told me I could do whatever I wanted and he would not stop me. But he made me promise him that I would always be the best,”
Since then Choi has played in jazz clubs throughout Korea as well as in Hong Kong and the Philippines. In his 20s he also played in a police band, during the Korean War. He marched up the Aprok River into North Korea. “We soon retreated after a large group of Chinese attacked,” he recalled.
In the 60s Choi moved overseas to work. In 1961 Choi formed a jazz band called the “Professionals,” in Hong Kong. This was when a Filipino, who had trouble saying Choi’s name, started to call him Rudy.
Choi said he returned to Seoul in 1976, but the reception he received was lukewarm.
“Rock n’roll and The Beatles had swept the country and only a few people were still interested in jazz,” the drummer said. Hard times followed. He started drinking heavily but then salvation arrived in the form of a hotel on the U.S. military base. “Not many Korean hotels were hiring jazz musicians, because there were no customers for our kind of music, but a hotel on the U.S. base was different.”
The same year he also founded a jazz community called the Korea Jazz Club that would later perform at charity events.
In 1978 Choi went on tour in the United States, stopping at seven cities including Los Angeles, New York, Chicago and Honolulu.
After a year on the road he returned to Seoul and started to work for the Hyatt and Lotte Hotels.

In the last decade or so Choi has been teaching jazz to young students at the Seoul Jazz Academy and lecturing at various universities.
When asked if living a lifetime as a musician, particularly as a jazz artist with a limited audience, was difficult ,Choi said in the 60s and the mid 70s his pay was far better than most. “Our earnings were far better than office workers. In the 70s we would receive a monthly payment of 6,000 won and that was equivalent to two sacks of rice.”
Choi said Koreans love standard jazz but the market here is still struggling. “Japan took to jazz later than Koreans,” Choi said. “The Japanese say their jazz era started in 1930 while Korea’s began in 1925. There were far better Korean jazz musicians back then. But today the tables have been turned. Japan offers far more opportunities to young jazz musicians.”
Choi believes that Korean songs are perfect for being reinterpreted into jazz.
“The Korean song genre known as “trot” originates from the swing term fox trot,” he said, as he made the sound of the beat of a trot song with his mouth. “The basic beats are similar and with a nudge, it soon turns into a perfect jazz piece,” said Choi as he started to hum a jazz tune that sounded like a clarinet or a trombone and which turned a Korean trot song into jazz piece.
Choi said it has been quite some time since he last been practiced. “I used to play four to five hours a day,” Choi said. “Nowadays I’m too busy doing press interviews and teaching.”