Young stars get a second chance to shine

Young stars get a second chance to shine

As a prelude to the second annual CJ Young Festival, to be held later this year, the CJ Media group will stage encore performances of last year’s hits. The performances will open this Friday with a play, “Jannabi,” which means “monkey” in Korean dialect. There will also be three dance performances and a set by the group Sorisup, which means “forest of sound.” Sorisup use traditional Korean instruments.
“Jannabi” will be performed by Free Theater, a group made up of theater and cinema majors from Kookmin University.
The plot revolves around a mentally unstable man who struggles to reconcile his present and his past.
The dance performances will follow the next day. The Hong Gyeong-hwa Dance Company will kick off with “The Kiss,” a modern dance interpretation of Gustav Klimt’s works. Thisable, a six-person dance group, will showcase their performance about two brothers who are separated during childhood. Kim Seol-jin will end the night with her modern dance piece titled “The Garden of a Snake.”
Sorisup, made up of university students majoring in traditional Korean music, will perform on May 13. The group was received with great enthusiasm last year. This year their show will consist of their trademark combination of theater and music.
The CJ Media Group has been active in supporting cultural organizations, mainly the Hwaum Chamber Orchestra, since 1996. Recently they extended their program by creating a new partnership with the Seoul Ballet Theater.
Through the CJ Young Festival, the company wishes to sponsor young talent in the performing arts. 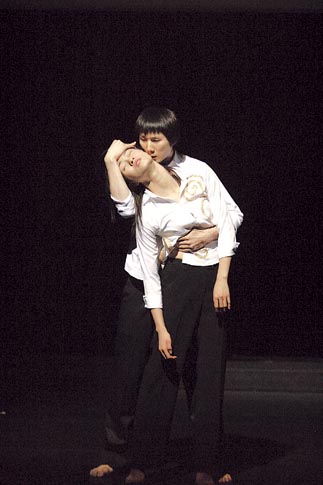 A scene from “The Kiss.” Provided by CJ Young Festival

The theme this year centers on “communication.” With this in mind, the festival aims to select work from young artists who have created works about communication problems. Applications can be submitted via the festival’s homepage, www.cjyoungfestival.net or by mail. The closing date is June 22.
A total of 11 teams will be selected for this year’s festival. There are categories for film, theater, dance and music (three teams will be selected for each category).
Along with this young talent segment, there will also be a User Created Content segment and a young adults theater workshop.