A movie tough guy with a few regrets offers some advice

A movie tough guy with a few regrets offers some advice 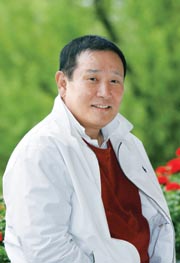 Lee Dae-geun, once a symbol of machismo, is back with the film, “Lee Dae-geun Family.”

He’s back ― Lee Dae-geun, the star who appeared in “Bet on My Disco” (2002) as “big brother,” a supporting character, has returned as the leading actor in “Lee Dae-geun’s Family,” which was released last week. The film is very loosely based on the 66-year-old actor’s life but the family in question is not his own but a fictional version
“Entering the mid-60s of my life, I felt it was necessary to spend some time with my family. Looking back, I have starred in more than 300 movies over my 40-year career,” said Lee. “Backstage, every object and person seemed to be living inside a drama.”
Lee was once an iconic strong man. In “Kim Du-han” (1974), “Kim Chun-sam” (1975), “King of Beggars” (1975) and “Sirasoni” (1979), he appeared as a lawman. In “Mulberry Tree” (1985), and “Byeon Kang-soe” (1986), he played a macho sex symbol. Shim Gwang-jin, the director of “Lee Dae-geun’s Family” praised “Lee’s macho image which transcends cliches. His character contains humorous and rhetorical context that lies beneath traditional madanggeuk.”
Lee’s response was modest: “People say I am strong; over the past 40 years, I’ve played many different roles. It’s interesting how the big hits were those in which I played a macho character. I guess society was yearning for a strong individual. After I starred in the “Kim Du-han” series in the 1970s, people would point at me and say, “Hey, there’s Du-han” (Kim Du-han was the son of Kim Jwa-jin, a commander in the Joseon Independence Army).
There was a time when people thought of him as a sex symbol, which he finds very peculiar.
This misunderstanding all started when Lee starred in “Mulberry Tree,” which dealt with a love affair between two villagers. Lee’s character was a servant. In the movie his low, bold voice as he said “Madame” was very popular with viewers. Even today, young people still imitate his character.
“Na Do-hyang’s ‘Mulberry Tree’ is one of Korea’s most popular short stories,” said Lee. “And “Byeon Kang-soe” is a masterpiece of pansori (traditional folk singing). Its main theme involves people searching for freedom during a time of censorship. It also depicts Korea’s emotions and humor, although people do not appreciate the literary aspects of the films and often misunderstand them as obscene. This is why I refused to star in ‘Mulberry Tree 2’ even though they offered me double the money.”
In the recent film, Lee’s character is portrayed somewhat differently. He is a tired, old father who has been abandoned by his children because his parenting was so poor. To commemorate the third anniversary of his wife’s death, he arranges for a reunion of his now grown-up children. However, they are resentful and bitter and attend reluctantly.
“When the director originally asked me to play the part, I declined,” said Lee. “However, the scenario was unbelievably attractive. Having your name in a movie title is an honor but it’s also a burden, like in ‘Captain Dae-geun.’ I tried hard to bring out the truth that the film was seeking to portray.”
How does the real Lee differ from his character in the film? There are so similarities. In real life, Lee lives alone. His three daughters and his wife live in the U.S. Although he is proud of his three daughters and their achievements in America he has some regrets.
“If I could start again, I would never allow my family to be apart,” he said. “Twenty-seven years ago, I won the Grand Bell Awards and had a chance to visit the U.S. I was shocked when I saw the Empire State building in New York. That’s when I decided to send my children there. They had, up to then, been living in their own little world as big fish in a little pond. Today, two of them have doctorates and the other one is a teacher. One should never be separated from family.”
Lee also starred in two films that have yet to be released: Gwak Jae-yong’s “Murim Yeodaesaeng” and Ha Myeong-jung’s “A Mother Does Not Die.” After his long absence from movies he was amazed at how big the sets have become and by the scale of movie publicity campaigns. He also has some advice for young actors.
“Being a star is no more than wearing a label given by society. These days, everyone in the industry seems to be called a star but all of them still feel insecure. They should be more modest and be satisfied in whatever circumstances.”