Down an alley, there’s a kettle full of makgeolli waiting for you

Down an alley, there’s a kettle full of makgeolli waiting for you 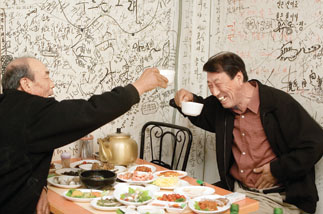 Jeonju offers the serene beauty of a hanok village, left, as well as a fun, boisterous night at bars specializing in makgeolli. [JoongAng Ilbo]

JEONJU, North Jeolla ― Eating two lunches in one day sounds crazy. However, if you’re in Jeonju, with limited time, you might have to. At least, that’s what I did last week.
The Jeolla provinces, in the southwestern part of the peninsula, are praised for their delicacies. With their fertile, open fields of rice and other crops, the Jeolla region has been called the bread basket of Korea for centuries. If you are sick of bringing your visiting friends to the Demilitarized Zone or to a folk village, Jeonju is a good alternative destination and it’s only a three-hour train ride from Seoul.
If the food is not enough to make your trip one to remember, don’t forget that Jeonju hosts a wide spectrum of festivals.
Jeonju takes pride in its traditional culture (even some bus stops and public pay-phone booths are decorated with traditional Korean roofs). This pride has led to the birth of several festivals, including one focusing on traditional music that runs from Sunday to Tuesday. In June, there is another festival to celebrate Dano, a traditional holiday based on the lunar calendar. It offers the chance to sample traditional teas, clothes and craftworks. Apart from festivals, it’s good to visit Jeonju at any time for its hanok maeul, a village full of traditional houses in Pungnam-dong. A group of some 700 hanoks are clustered here, offering a rustic setting in which to enjoy a variety of traditional culture from music to games.
Park Byeong-nam, a Jeonju city official in charge of culture, has reason to boast that his city “has all it takes to be a perfect tourist spot because of its food and art.”
Once Jeonju natives start to brag about their city, it’s unlikely they will stop. One good example was Kim Dong-ho, a Jeonju taxi driver. In answer to a question about which restaurants he recommends, he slowed his car and started to give me a long list.
“Jeonju natives are known for their picky palate, and if a restaurant is approved by us, it means it is trustworthy,” Kim said, beaming with pride. Fair enough, this reporter has two strong legs and one hungry stomach. So I checked out the restaurants below, all of which were selected with the help of the city government and my new uncle Kim 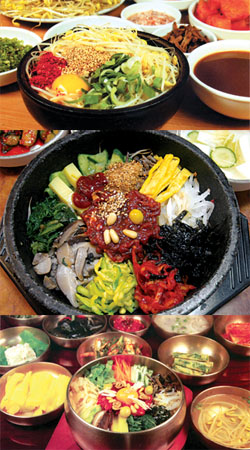 Kongnamul gukbap (Bean Sprout Soup With Rice)
It’s a Jeonju tradition to have a generous bowl of kongnamul gukbap at the heavenly price of 4,000 won ($4). Sambaekjip (063) 284-2227 is a legendary source of this soup. It sits near a street of movie theaters in Gosa-dong. It is now open 24 hours a day, 365 days a year ― in the past it would close after selling its 300th bowl of the day. Consequently, regular customers named it “sambaekjip,” meaning a 300 house.
The soup comes with a bowl of minced green peppers, dried seaweed and salted and fermented tiny shrimps, which you add to the soup according to your taste.
For many people the highlight of the soup is the raw egg dropped into the broth, and the generous restaurant owner gives you an extra cooked egg on the side. This soup with rice is widely appreciated as a way to alleviate the effects of heavy drinking, as bean sprouts are believed to ease the pain of a hangover.
Sambaekjip is just one of many good restaurants that serve the same soup. There is Waeng-i Kongnamul Gukbap, (063) 287-6979, with its famous mission statement, “The soup is boiling even when you are sleeping.” Others, which I could not visit due to the limited size of my stomach, are Kongnaru Kongnamul Gukbap (063) 288-4853 and Samilgwan (063) 284-8964.

Makgeolli Alley
“You can’t say you’ve been to Jeonju without visiting the Makgeolli Alley,” said Kim, the taxi driver.
Makgeolli is a type of traditional rice wine that is available anywhere, so I wondered why Jeonju’s version is so special. My skepticism vanished after I visited one of the bars that are clustered in the alleys of Samcheon-dong. The secret lies in quantity of delicious treats that arrive with a copper kettle of the rice wine. One kettle carries three bottles of rice wine, and costs 12,000 won. How about the side dishes? They are free. More surprisingly, an additional kettle comes with a whole new tray of snacks. The principle is that the more kettles a party orders, the higher the quality of the side dishes.
My first kettle arrived with 13 dishes, including steamed clams, spicy fish soup, a fried hair tail fish, sliced shellfish, panfried patties with vegetables and more. The second and third kettles arrived with pork and fermented skate, a fish that is a delicacy of the Jeolla provinces. I eventually stopped counting because it became pointless. The dishes keep coming, as long as customers are able to drink more kettles.
With this approach, these humble, small bars with shabby plastic chairs and tables are always filled with customers. Some even come to Jeonju just to visit this alley. Seong Cheol-won, 42, is one example. He had come with a gang of his friends from Yeoju City, Gyeonggi and they were having their third kettle. “I drank in this alley some years ago,” Seong said. “I couldn’t forget the taste of the side dishes, so now I come here often.”
When Seong wakes up with a rice wine hangover the morning after, we know where he can go ― to a bean sprout soup restaurant.

Bibimbap
The dish that represents this city more than any other is bibimbap, in which you enjoy a variety of ingredients like meat and vegetables by mixing them with cooked rice and a spoonful of hot pepper paste.
Jeonju has several dozen restaurants that specialize in this dish.
A signature Jeonju bibimbap is made with thin slices of quality raw meat, plump slices of mung-bean jelly and assorted vegetables.
Plus, they cook the rice with beef broth, not just water, which adds to the flavor in every grain.
The other categories of Jeonju bibimbap are defined by the type of bowls, either high-end brassware or a sizzling pot made of stone. Speaking from experience, both are great; the brassware gives you the sense of a luxurious meal and the pot kind offers a lively atmosphere with the sound of sizzling. The bowl of bibimbap is accompanied by a tray full of some 10 side dishes, the exact contents being determined by which products are in season.
For brassware, try Seongmidang (063) 287-8800, Gogung (063) 250-3211 and Gajok Hoegwan (063) 284-2884. Offering bowls priced between 8,000 won and 10,000 won, these places have earned their reputations over several generations.
According to the Jeonju city authorities, Gajok Hoegwan’s bibimbap is the standard for in-flight meals on Korean airlines and exports to the world market.
For a sizzling pot, visit Hangukjip (063)284-2224, which also has a charming little garden that is now bright with spring flowers and green leaves.

For another type of sizzling pot dish, there is dolsotbap, which simply means rice served in a pot of stone. The difference between bibimbap and dolsotbap is that the latter is served with soy bean sauce spiced with pepper slices and sesame and it has different kinds of vegetables on top of the rice.
Banya Dolsotbap specializes in this dish and its food has a good reputation. It serves assorted beans, carrots, mushrooms and sliced u-eong, or burdock, together with an impressive selection of side dishes including seasoned deodeok, a type of root with fragrant taste and a chewy texture.
There’s only one thing you need for a successful trip to Jeonju ― a good appetite.

Transportation
Trains for Jeonju depart from Yongsan Station. There are no KTX bullet trains that go directly to Jeonju. You can take the KTX train to Iksan and then transfer to Jeonju. The journey takes about 2-and-a-half hours. Otherwise, there are regular trains that depart from Yongsan Station, such as the Samaeul or Mugunghwa trains, which take three and 3 hours and 30 minutes respectively.

Lodging
An ideal place to stay is the hanok village. Jeonju operates the village as an attraction and visitors can ask for more details at the city’s information center (063) 282-1330. English, Chinese and Japanese are spoken. A room at the village costs between 60,000 won and 120,000 won per night. The information center also offers tips on lodging at different motels and hotels.