Luck and the lady

Luck and the lady 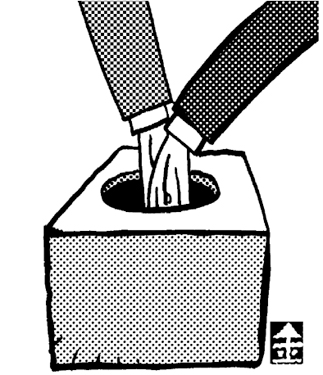 What if we selected our president by lottery? Indeed, there was an attempt to choose a presidential candidate by drawing straws in the first presidential selection in 1963, after the May 16 coup in 1960. The opposition parties agreed to produce one candidate who would represent every opposition group against Park Chung Hee. The party that produced that candidate was then supposed to yield to other parties for prime minister and speaker of the assembly. Nonetheless, nobody yielded. The national convention of pan-opposition parties was held, but the attempt to produce one unified candidate failed. Many candidates from each opposition party instead competed against each other. Opposition candidate Yun Po-sun gave way to the Park Chung Hee regime by a difference of 156,026 votes. It was the smallest difference ever in the presidential elections. The failure by the opposition camps to unite could not have been more engraved on their bones.
Lee Myung-bak and Park Geun-hye are quarreling over the rules for the Grand National Party primary election.
Former mayor Lee asserts that the two must follow the demands of the day. The former party leader, Park, retorts that one is bound to abide by the rules even when playing poker, and is talking about giving up running in the primary. Sohn Hak-kyu, the former provincial governor, left the party because of the primary election rules.
Fights like these occur when the candidates feel they are winning, because the presidential chair is right in front of them. But no one wins games like these.
Having witnessed the passionate aspiration for democracy in June of 1987, both opposition party candidates, Kim Young-sam and Kim Dae-jung, turned down proposal after proposal to unite for every reason they could think of. Kim Dae-jung even thought that running separately from Kim Young-sam would help him because it would divide the votes in the Gyeongsang Provinces. The same thing happened in 1980 when people mistakenly believed the “spring of Seoul” had arrived. Kim Dae-jung asked Kim Young-sam to run separately, and they’d take the ruling or opposition parties based on the result.
Blame is usually placed on the one who makes an issue of things or the one who goes back on a promise, like former candidate Rhee In-je, who chose to run even though he was defeated in the 1997 party primary. What is more problematic are the Grand National Party National assemblymen who are only calculating their personal interests. Those who boast that they should lead the country do not seem much different in their cravings from ordinary men buying lotto tickets.