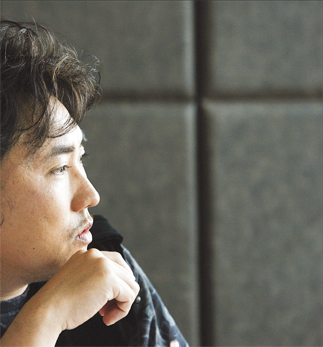 Lee Seung-cheol, a k a “The King of Live Concerts,” is at it again. Starting in Suwon, Gyeonggi province, on May 12, Lee will stop at 30 cities across the nation this year for yet another national tour. He has already performed about 2,000 shows, and has embarked on a national tour in every year since 2002, selling out at all stops in 2006. Perhaps the moniker “king’ isn’t too extreme.
Already in his 22nd year, Lee still releases new singles every year and shows up on charts. With his sweet, powerful voice and melancholy melodies and lyrics, Lee sings just the type of ballads loved by many a Korean. When the JoongAng Ilbo sat down with him, Lee said, “I hate it when things get too serious” during interviews, but beneath his frank answers one could hear the voice of experience.

What is the purpose of this tour?
I want to set an example of a singer that can survive and thrive just by doing concerts. There are two premises. One, I have to keep coming up with new stuff so that I can maintain my fan base, and two, the shows themselves have to improve. I’ve got fans in their teens and in their 60s. Some are fans of my old stuff, and others became fans in the latter part of my career. For this tour, I wanted to cater to older fans by introducing 120,000-won VIP tickets that provide additional services. On the technical side, we will install a 5.1-channel Dolby surround system for the first time in Korean concerts. No matter how hard we tried before, there were always complaints that the music was too loud in the front row, and that people at the back could barely hear. So the production costs could be about three times those of last year. But what can you do? Running quality shows is an asset in itself.

On a television talk show recently, you created some controversy by saying you quit drugs because you were humiliated, that you’re as rich as your second wife, and that your song “Sorichyeo”(Shout) was not a plagiarized piece.
I had expected all along that a TV program that puts entertainers under the spotlight would be launched in Korea, just like in the United States. As long as I remain an entertainer, I am willing to be the fodder for public discussion. If you’re being talked about, that to me means you’re popular. As far as money is concerned, I don’t think an entertainer would be doing an honorable thing by living out of a rented room with monthly dues. The real service to society would be to earn the money that we earn, keep our fans happy, and give back to charities when we can. As for the question of plagiarism, I might be the first singer to stand up to allegations of copying another song. I didn’t mean that plagiarism was entirely out of question, but that it was a legal matter whereby the original composer had to file a lawsuit to establish a case against us.

Some say you’ve mellowed over the years.
One singer recently said he couldn’t perform live on radio. I used to be like that, too, but I’ve changed. Perhaps the radio show’s producer and writers are your fans, and you must perform for your fans no matter where you are. I think the turning point was the success of the single “Never Ending Story.” Before that song came up, there were whispers that “Lee Seung-cheol was finished.” But the next thing I know, the song was a huge hit, and I was eternally grateful. Once I started appreciating my surroundings more, I was able to become relaxed, and I started hearing people say I’ve changed. My second marriage was also a factor. I never knew being married could be this great.

Has all of that changed your outlook on music?
The past shows were like battles where I’d fight to have people listen to my music and see me perform on stage. But now, I think it’s more important to enjoy being with the fans and to feel some sort of connection with them. That way, I can have deeper appreciation for my fans. When I see them, I get to thinking that perhaps a singer should never retire. Fame is a gift from those fans, and I can’t enjoy working for them if I’m always thinking, “It’s over now.’

How do you keep your body and vocal cords in shape?
I jog every morning, and I stay away from alcohol prior to concerts. My rhythm changes whenever a show is around the corner. As for my vocal cords, I just don’t use them much. People who perform at bars and clubs have hoarse voices. But if I don’t sing for an extended period of time, I would lose the touch. When I am recording an album, I just try to sing in my head. If I sing too much, then I tend to develop some bad habits. I’ve recorded almost all songs this way.

Do you have any habits or rituals?
Unlike many singers, I am a morning person. I get up at seven, and go to sleep at 11 p.m. My wife says I am a person who can’t sleep because he’s so curious about what’s going on in the world. I record my tracks between 3 p.m. and 6 p.m. I write lyrics at around 5 a.m., after getting some sleep first. I try to avoid places with background music, or even karaoke. I catch even the quietest pieces of music, and that can be rather tiring.

What is the style of music that you pursue?
The reason that I’ve been blessed with songs from great composers is that I haven’t been picky about genres and I’ve done what the writers have wanted me to do. I am not an artist or a musician: I am a singer. And I have no prejudice or stereotypes about genres. I simply want to be able to sing all sorts of songs. I look at both my songs and myself as products for public consumption.

Your singing and melodies have become less complicated over the years.
Any song that’s too flashy will grow old in two years. But a song that seems rather bland at first listen will have a longer shelf life. Think of jeans, or that simple logo on a Coca-Cola bottle. They are not artistic or anything, but they end up becoming the classic.