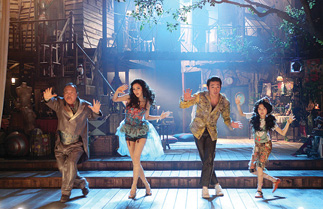 In a way, “The Fox Family” embraces the true spirit of the musical as a marginalized art form. The film is a musical parody about a family of nine-tailed foxes, the supernatural characters from ancient Korean mythology. It begins with a comic tone by featuring the characters as social minorities who are desperately trying to become like other people. The foxes strut and dance on the streets of Seoul with homeless alcoholics and a demented old lady who has been abandoned by her children. And there are the scenes of the fox family running a circus in which they scare the hell out of local children by splashing blood everywhere.
The family’s efforts to adjust to the life of human beings in an alien city has a specific purpose. They need to get hold of a fresh human liver and eat it before their 1,000th birthdays, in order to become human.
Perhaps, in practice, the director reveals the premise of the film too quickly. The film stresses the precious value of life, even if it is accompanied by agonies or hardship. But it makes this unexceptional point in a way that is much too emotional.
For example, the father fox (played by Ju Hyeon) manages to stop a young woman who thinks she’s too ugly and unloved from committing suicide by saying that “being human is a privilege.”
The film mostly deals with the struggles of the fox family to become human, and maybe that’s its major flaw.
“The Fox Family” repeats its basic theme too frequently, without introducing other aspects that could increase the film’s intensity. The tension starts to diminish as soon the family’s mission is revealed, but one third of the film is devoted to questions of how they will kill their prey.
There are some pleasing musical sequences and stylish cuts like the film’s opening scene, which deliberately mimics a western movie by showing a mysterious wagon stopping on a deserted prairie. Later a man gets out of car to ask a villager where he can find “a flock of humans.” In the same sequence there is a chubby frog on a dusty road swiftly devouring a fly. In the next scene there is an exhausted dog lolling on the ground in the heat of a summer’s day, followed by a shot of the blood-soaked teeth of a young girl, who turns out to be the youngest daughter of the fox family.
The musical sequences have nothing like the scale of blockbuster musicals such as “Chicago” but, considering that the film was made for 3.5 billion won ($3.8 million), its wire-action scenes and computer graphics deserve praise, especially compared to “Kumiho” a Korean film based on the same legend that perplexed its audience with the blue laser beam that shone from the heroine’s eyes.
The sexual elements are overdone. The nine-tailed fox in the original Korean legend only hints at sex, mostly by featuring the fox as a woman who lures a man to her bed to steal his heart. The film produces helpless giggles in some scenes ― especially when Gi-dong (Park Jun-gyu) tries to lure a girl to his motel room to shoot a sex video he hopes he can use to pay off a debt. The girl is eating a noodle and he tells her, “Your pink lips are like an erect noodle; I see the strands entering the deep tunnel of your mouth. I want to bite your noodle.”
There are also amusing scenes that are a parody of “Texas Chainsaw Massacre.”
Overall “The Fox Family” has got the style and a human interest required to grab the attention of relaxed holiday audiences, but unfortunately it fails to touch the heart.

The DVD includes deleted scenes, interviews with the director and actors and documentary footage about the making of the film.